Skip to content
Himal Briefs > Every vote counts in Kashmir

Every vote counts in Kashmir 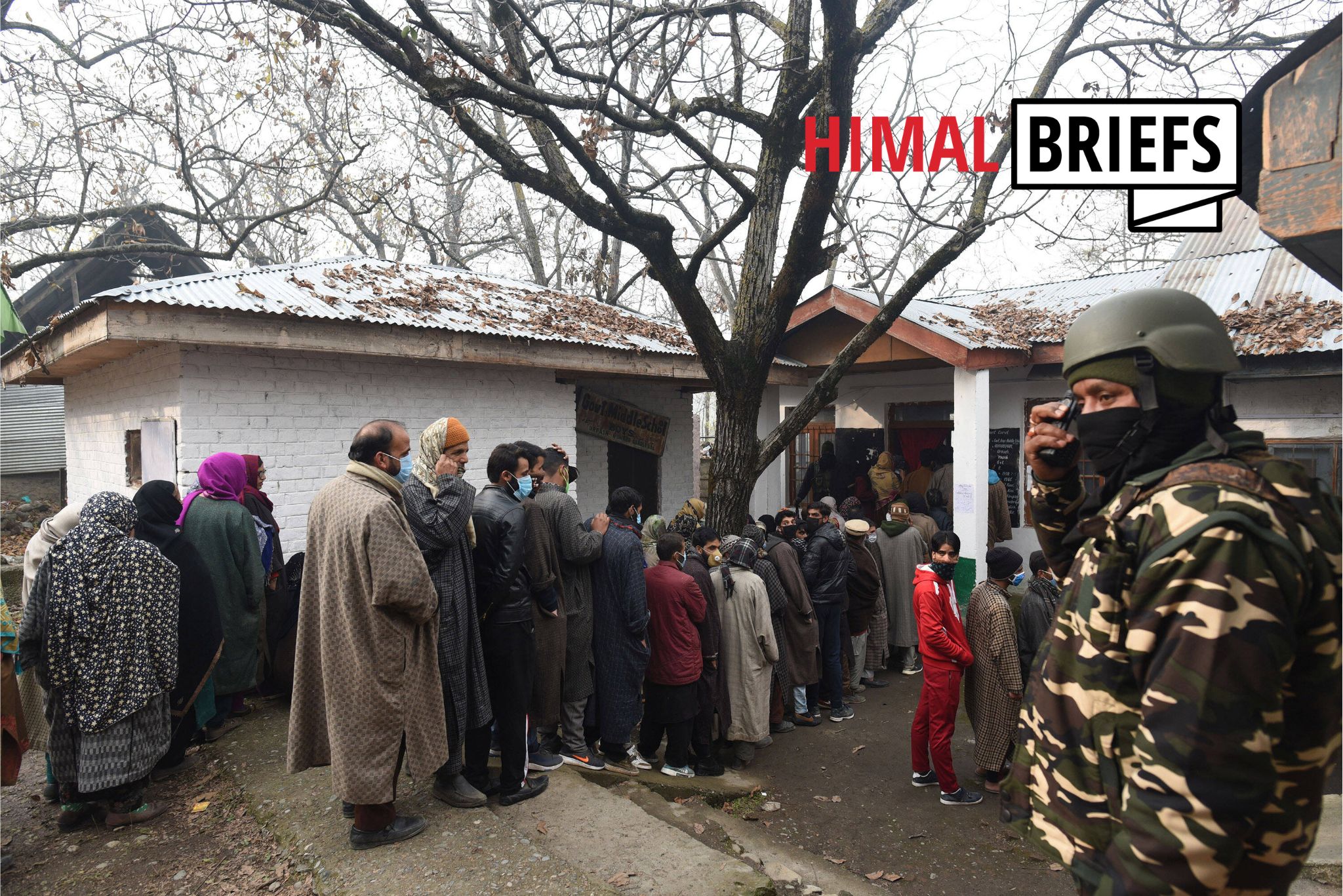 A special summary revision of the voter list in Jammu & Kashmir was recently announced by Hirdesh Kumar, the Chief Election Officer of the union territory. After the abrogation of Article 370 revoking Jammu & Kashmir’s special status, non-locals residing in the region have now been declared eligible voters for the upcoming assembly elections. The regional pro-India parties have strongly opposed this move, calling it an assault on the identity of indigenous Kashmiris, Dogras and Sikhs. This was promptly countered by Narendra Modi’s Bharatiya Janata Party, which runs the union government. It defended the move, accusing regional parties of spreading propaganda and said that the authorities were following the Representation of the People Act (RPA) which is now applicable to J & K. This act mentions that all ordinary residents are eligible to vote in a constituency. Kumar has said that the electoral registration officers will scrutinise the documents of people to decide on their eligibility on a case-by-case basis. The BJP’s declared intentions to elect the first Hindu Chief Minister of Jammu & Kashmir, and its tactics of horse trading to install favourable governments in various Indian states have led to justified fears of misuse of the RPA. In a previous column for Himal Briefs, we discussed the process of delimitation in Jammu & Kashmir and how it was the first important step towards conducting elections in the region. The BJP-led government has redrawn the constituencies and given a disproportionate number of seats to the Hindu-majority Jammu region. Regional parties had accused the BJP of gerrymandering and trying to reduce the influence of Muslim votes. The delimitation process has now been finalised, and the government has taken further steps to prepare for elections.

Even before the revocation of J & K’s special status, pro-independence groups would often accuse the Indian government of trying to settle outsiders in the region and tipping voter demographics in their favour. In the same press conference, the chief election officer said that 2.5 million new voters were expected to be added to the electoral list after the summary revision is conducted. This has renewed discussions around demographic change in the region, which many see as the Indian government’s response to the decades-old Kashmir conflict. The regional pro-India parties who claim loyalty to the Indian constitution have protested against the decision. Muzaffar Shah, the leader of the Awami National Conference, claimed that the number of non-locals to be added to the list would be 5 million voters “brought from outside” to support the BJP. Other major political parties and former chief ministers like Mehbooba Mufti, Omar Abdullah and Farooq Abdullah have also opposed granting voting rights to non-locals. The opposition is unlikely to yield any results or deter the Indian government from moving forward with these decisions. Pro-India parties in Jammu & Kashmir have a history of backtracking on their commitments and making power grabs at any cost. The 2020 District Development Council (DDC) elections were the first elections after the abrogation of Article 370. Many speculated that the People’s Alliance for Gupkar Declaration (PAGD), an amalgamation of the regional parties, would not fight the elections given that the DDCs were to operate under the newly-formed bureaucratic system, but they finally did. This decision was quite significant since parties of the Gupkar alliance boycotted the 2018 panchayat and urban bodies polls over the issue of Article 370. Their participation was seen by many as an acceptance of the new status quo. A national spokesperson of the BJP would later point out that PAGD’s participation in the elections meant that they had accepted the electoral changes. Both Mehbooba Mufti and Omar Abdullah, two former chief ministers of J & K, had declared that they would not contest assembly elections under the current circumstances. Mufti had said that they would not participate in the elections until Article 370 is restored, while Abdullah had taken a relatively soft approach by declaring that he would not participate in the elections while J & K remains a union territory. Not surprisingly, both parties have now started to prepare for the upcoming elections. These parties have consistently demanded the restoration of statehood and J & K’s special status, but their willingness to stand up for these demands is questionable.

BJP will electorally benefit from these decisions, but the limited amount of goodwill that India had garnered from previous elections has now been permanently eroded.

Mehbooba Mufti strongly opposed the voting rights decision as the last nail in the coffin of electoral democracy in Kashmir. While pointing to the ‘Hindutva’ policies of the BJP-led Indian government and calling the 2.5 million new voters “BJP voters”, Mufti accused the BJP of making unconstitutional decisions in Jammu & Kashmir. It is important to mention that according to the 2011 census, Kashmir has around 2.8 million migrant workers who will now be eligible to vote in the assembly elections. After the uproar against granting voting rights to non-locals and the addition of 2.5 million new voters to the list, the government had clarified that the new voters will also include those who had turned 18 years old since the last summary revision; this includes those who turned 18 on 1 October, 2022. The chief electoral officer later tried to do damage control by saying that the actual number of new voters will only be known after the revisions are completed and that the figure of 2.5 million was not exact. However, Kashmir has a large population of migrant workers who come from various parts of India. According to Kumar, army personnel deputed at “peace stations” will also be able to vote, despite the fact that the entire region is governed by the Armed Forces Special Powers Act (AFSPA), an emergency law imposed in areas categorised as ‘disturbed’ which gives the army wide-ranging powers from arbitrary arrests to the use of lethal force. Given the large number of migrant workers and army men in Jammu & Kashmir, their electoral influence is going to be significant. Since the abrogation of Article 370, the number of armed forces in the region has surged, but the Indian government has never officially recognised the number of personnel deployed in Jammu & Kashmir.

These developments have led to a two-fold response in the region. Firstly, they have brought back memories of the 1987 state assembly elections, which many believe was rigged in favour of pro-India parties. People’s Conference chairman Sajad Gani Lone tweeted that granting voting rights to non-locals was a disastrous move and a replay of the 1987 elections. The rigging is said to have given rise to the first armed insurgency in Kashmir. The ensuing conflict witnessed thousands of killings, enforced disappearances and unspeakable human rights violations. Secondly, the fear of demographic change has led to apprehensions that attacks on non-locals might become a mainstay strategy of militant groups. Migrant workers and Kashmiri Pandits have suffered several fatal attacks during the last year. These attacks have been seen as a retaliation to the alleged demographic changes in the region. Weekly news magazine India Today reported that Kashmir Fight, a Lashkar-e-Taiba backed group, threatened to target non-locals while mentioning “demographic terrorism” of the “fascist settler Indian regime”. A few attacks have been reported since the chief electoral officer made the announcement, but there is no acceleration in such incidents yet. Many migrant workers, however, believe that the attacks would surge in the run-up to elections.

Pro-India parties in Jammu & Kashmir have a history of backtracking on their commitments and making power grabs at any cost.

The BJP still views Kashmir as any other Indian territory (or so it claims) but the Kashmir conflict cannot be brushed aside while making critical decisions about the territory. The revocation of Article 370 which granted special status to the region was not the only decision taken on 5 August, 2019. The state was also bifurcated and demoted to the status of a union territory with a disempowered assembly. A sizable Kashmiri population would support and vote for the leaders of pro-India parties like National Conference and the People’s Democratic Party. Their participation in the election process may or may not have reflected their allegiance to India’s presence in the region, but it did provide legitimacy to it. However, doing away with the region’s autonomy, followed by unfair delimitation and granting voting rights to non-locals has delegitimised these leaders and vindicated the pro-freedom parties. BJP will electorally benefit from these decisions, but the limited amount of goodwill that India had garnered from previous elections has now been permanently eroded.

Other updates from Kashmir

The Indian government arrested several Kashmiri Muslim clerics and scholars representing different schools of Islamic thought. They were charged under the extra-judicial Public Safety Act which allows preventive detention of up to two years without trial. It’s the first major clampdown on clerics since the abrogation of Article 370, and could be a precursor to further repression in the lead up to the upcoming elections. The police claimed that they had abundant evidence to prove that the clerics were “instigating” youth. It did not clarify why, despite this evidence, they weren’t charged under legislation prohibiting hate speech or other similar legal provisions, allowing for them to be tried in a court of law.

Maknoon Wani is a journalist and academic mentor and an incoming graduate student at Oxford Internet Institute, University of Oxford. Maknoon has extensively covered the Kashmir conflict, internet shutdowns, and anti-minority hate speech in India. His interest also lies in technology policy and internet governance. Maknoon covers Kashmir as a regular contributor to Himal Briefs. He tweets at @maknoonwani.