Delimitation and the politics of coercion in Kashmir. 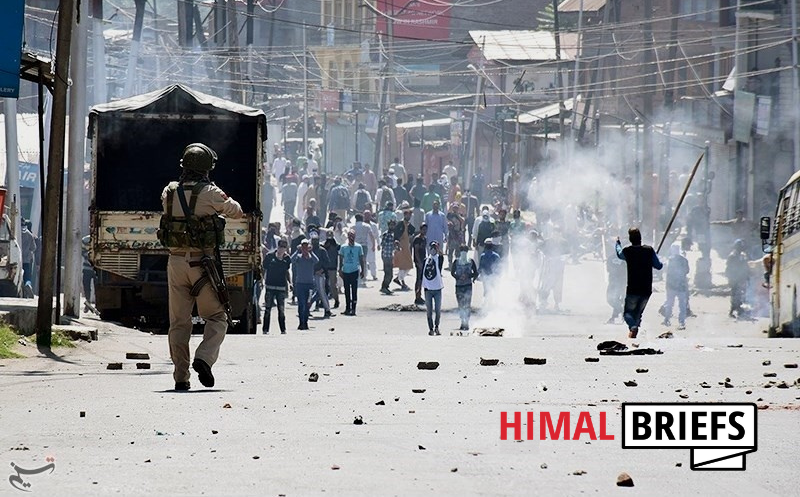 Expect an insider’s view from some former contributors (and a few new faces) on important and underreported topics from across the region, ranging from politics, to social issues, legislation, economic concerns, cultural debates, the environment, and media and the public sphere. We hope Himal Briefs makes it to your reading lists.

On 14 March, Indian authorities booked Fahad Shah, Editor of a well-known multimedia news platform, The Kashmir Walla, under the extra-judicial Public Safety Act. The act allows the government to imprison anyone for up to two years without a trial. He was arrested on 4 February on charges of uploading “anti national” content on his Facebook page and secured bail multiple times in various cases before being charged under this act. Several of his colleagues have also been imprisoned for sedition and terrorism. The abrogation of Article 370 in August 2019 was a turning point in regional politics that started a fresh face-off between the two nuclear-armed nations of India and Pakistan. The move was implemented along with a months-long communication blockade and one of the world’s longest internet shutdowns. Since then, the Indian government has been trying to project normalcy through investment summits, concerts and an extensive PR campaign. The Delimitation Commission, set up to redraw constituencies, is a step towards conducting elections and electing a favourable government. The arrest of journalists and a tight gag on news media portals point toward efforts to control information coming out of Kashmir, which can help justify the decision to remove its limited autonomy.

It has been seven years since Legislative Assembly elections were held in the disputed territory of Indian-administered Jammu and Kashmir, casting a shadow on the “world’s largest democracy”. In the last three years, the region has witnessed a massive attack on an Indian forces’ convoy in Kashmir, followed by a near-war situation between the two countries (in February 2019), and then a change in the constitutional character of Jammu and Kashmir brought about by the abrogation of Article 370. This was a major poll promise made by the Hindu-nationalist Bharatiya Janata Party (BJP), which came to power in 2014. The Indian government argued that this decision would end the decades-long insurgency, free the region from nepotistic politics and lead to development. However, reportage from news portals like The Kashmir Walla and journalists like Fahad Shah has made it difficult for the government to claim success.

Elections will positively impact India’s position as a democratic country, but delimitation, the first step towards elections, has run into several roadblocks since it started.

In op-eds for the Foreign Affairs and Foreign Policy, Shah argued how dissatisfaction among the local population is at an all-time high, and the anti-India insurgency has taken on an indigenous character. Violence has only risen since the abrogation, and the Indian government has failed to conduct elections in the ‘developed New Kashmir’ (or ‘Naya Kashmir’). He picked holes in various arguments made in support of the abrogation, which many say was done with absolute militaristic might.

The volley of justifications given for the decision to revoke the region’s limited autonomy, and demote its status from state to union territory, now seem to be faltering. Militancy has been invigorated, with local recruitment at an all-time high. Further, the lack of democratic processes in the last seven years has made it difficult for the Indian government to claim normalcy and revival of democracy in the region. Conducting elections and installing a pro-BJP government in the erstwhile state is a means to this end.

The Kashmir issue assumes more significance because China is also a party to this dispute. China controls the Aksai Chin region which India considers a part of its territory. A bloody scuffle between the Indian army and members of China’s People’s Liberation Army in 2020 killed 20 Indian soldiers in one of the worst skirmishes since the 1962 Sino-Indian war.

Many have attributed China’s aggressive militaristic approach to India’s moves in the disputed territory. Immediately after the constitutional changes made in August 2019, it criticised India for “undermining China’s territorial sovereignty by unilaterally changing its domestic law” and called it “unacceptable”.

The Indian government has been trying to project normalcy through investment summits, concerts and an extensive PR campaign.

In February 2022, Pakistan and China issued a joint statement that opposed the “unilateral actions” in Kashmir and declared that both countries would support “each other’s core interests”. This puts India in an uncomfortable situation where it needs diplomatic support from the US, which is also looking to curb China’s influence in Southasia. The support from the superpower, however, comes with some conditions. President Joe Biden, in his first phone call with PM Modi on 8 February 2021, emphasised that a “shared commitment to democratic values” was the “bedrock for the US-India relationship”. The phone call came after comments from the US State Department on 4 February, which criticised internet blockades in India, specifically during the protests which opposed the newly passed farm laws. On 10 February 2021, it welcomed India’s decision to restore Jammu and Kashmir’s internet access after an 18-month long shutdown. These developments signify the region’s influence on India’s foreign policy.

Elections will positively impact India’s position as a democratic country, but delimitation, the first step towards elections, has run into several roadblocks since it started. The local pro-India parties which used to outshadow the Hindu-nationalist BJP, have repeatedly rejected the commission’s recommendations, accusing the government of gerrymandering to reduce the influence of Muslim votes. The BJP has, in the past, promised the first Hindu Chief Minister for Jammu and Kashmir – something that will reap huge dividends in the heartland of India. However, rising discontent among Kashmiris and clashes between the Indian forces and Kashmiri militants are denting the government’s plans. Its response has been to arrest journalists and ban government employees from political activities.

Violence has only risen since the abrogation, and the Indian government has failed to conduct elections in the ‘developed New Kashmir’ (or  ‘Naya Kashmir’).

Delimitation will be extremely important for the BJP to win the elections, given its militaristic approach in Kashmir. Conducting elections can help create more justification for the abrogation, and the prospect of a Hindu Chief Minister can boost the incumbent party in the 2024 general elections. The government now aims to control the outflow of information to the international community and domestic voters as well. Taking over the Kashmir Press Club in a military-style coup was another step towards this end. There have also been reports of news archives from Kashmir vanishing from the internet or their access being curtailed. It is also worth mentioning that only a few foreign journalists have been allowed to report from Kashmir since August 2019. In December 2020, a group of journalists was invited by Ministry of Home Affairs (MHA) to Kashmir for a three-day tour to cover the District Development Council elections.

These developments point to concerted efforts by the Indian government to limit research and reportage on Kashmir and the ongoing repression. It wants a Kashmir which looks stable and politically active but is under the absolute control of the Indian government. In Kashmir, there is a general sense of paranoia. Kashmiris fear a demographic change made possible after the abrogation of the special status. The special status accorded exclusive property rights to the local population. Indian forces, on account of insurgency, have garrisoned the disputed territory with troops and bunkers. The attacks by rebel groups are rising, and fair or not, conducting elections will be a challenge.

This article was updated after publication on 2 April 2022.

Maknoon Wani is a journalist and academic mentor and an incoming graduate student at Oxford Internet Institute, University of Oxford. Maknoon has extensively covered the Kashmir conflict, internet shutdowns, and anti-minority hate speech in India. His interest also lies in technology policy and internet governance. Maknoon covers Kashmir as a regular contributor to Himal Briefs. He tweets at @maknoonwani.