Skip to content
Afghanistan > Taliban regime under siege, within and without

Taliban regime under siege, within and without

One year later, the Taliban is under attack from rival groups. 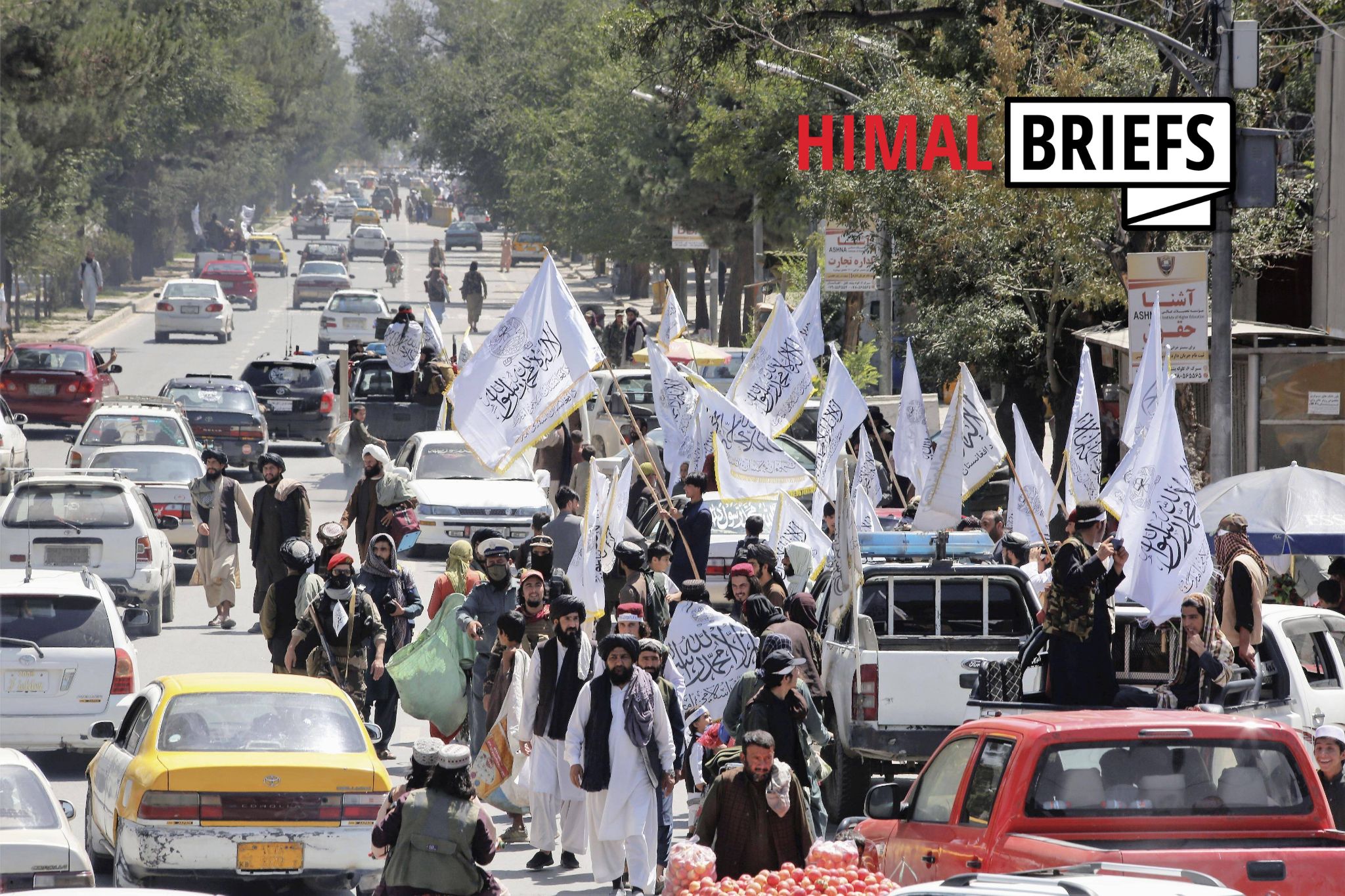 Marking one year since US withdrawal from Afghanistan, Taliban flags are flown on the streets of Kabul. August 2022. Photo: IMAGO / Kyodo News.

Afghanistan is far from stable, more than a year after the Taliban’s takeover of Kabul in August 2021. As various reports from the United Nations Security Council’s (UNSC) sanctions monitoring team concerning Islamic State in Iraq and the Levant (ISIL), Al-Qaeda, and other associated individuals and entities have shown, transnational jihadi groups have had more space to operate following the withdrawal of US troops from Afghanistan. This is a worrying situation for many neighbouring countries, especially Pakistan, where the Taliban victory has strengthened the position of banned groups like the Tehreek-i-Taliban Pakistan (TTP), as outlined in a previous edition of Himal Briefs. But this is equally threatening for the Afghan Taliban regime itself, which came to power promising stability and peace to its people. As it stands, the regime is under attack from groups that rival it both ideologically and politically.

On 5 September, 2022, a suicide bomb attack at the Russian embassy in Kabul killed at least six people, including two embassy staff. The attack was later claimed by the Islamic State-Khorasan (IS-K). This was the first major attack on foreign interests in Kabul after August 2021, which demonstrated that the IS-K is active in Kabul and is on a mission to disrupt the stability that the Afghan Taliban initially promised.

The group is now increasingly targeting high-profile Afghan leaders. On 11 August, 2022, a Taliban cleric, Rahimullah Haqqani, known for his anti-Islamic State views, was killed in a suicide bomb attack. The IS-K was able to demonstrate its ability to not only target the Taliban directly but also to plan and execute sophisticated attacks.

To further weaken the Taliban regime and spark sectarian tensions, the IS-K is specifically targeting Afghanistan’s religious minorities, especially the Hazara community. On 30 September, a suicide attack inside the Kaaj Educational Centre in the Dasht-e-Barchi district of West Kabul killed over 53 people belonging to this community, according to the United Nations Assistance Mission in Afghanistan (UNAMA), many of them young women.

As it stands, the regime is under attack from groups that rival it both ideologically and politically.

Between August 2021 and September 2022, the IS-K has claimed responsibility for at least 13 attacks on the Hazara community, which have killed and injured at least 700 people, according to data compiled by Human Rights Watch. The repeated attacks demonstrate the regime’s political and military failure to provide security. Former Taliban Interior Minister Saeed Khosty said in October 2021, “As a responsible government, we are responsible for protecting all citizens of Afghanistan, especially the country’s religious minorities.”

But the Hazara community is not the only religious minority under attack in Afghanistan. On 29 April, 2022, over 50 people were killed in an attack on a Sufi mosque in Kabul, where people had gotten together after Friday prayers for a congregation known as Zikr – a religious practice seen by many orthodox groups as heretical. (Sufism is a school of thought more prominent among followers of Sunni Islam). That they came under attack in Afghanistan shows a wider failure of the Taliban regime to consolidate its regime and bring peace to its various beleaguered communities. It also shows that the Taliban does not even hold a credible comparative advantage regarding the Khorasan faction of the Islamic State.

While the IS-K is attacking the Taliban and targeting religious minorities, its strength is growing. According to the aforementioned July 2022 UNSC report, the IS-K can now attract and co-opt fighters from other regional and transnational groups based in Afghanistan. This includes the anti-China East Turkestan Islamic Movement (ETIM). The IS-K is also allied with the Tehreek-i-Taliban Pakistan (TTP), which, according to said report, “constitutes the largest component of foreign terrorist fighters in Afghanistan (between 3,000 and 4,000).”

One key reason why the Taliban regime has not been able to take decisive action against the IS-K is that the broader ‘Taliban movement’ has factions that sympathise with the IS-K. For instance, there is some indication that the Haqqani network – one of the most powerful Taliban factions – has coordinated attacks with the IS-K. As the May 2020 report of the UNSC showed, most attacks carried out by the IS-K showed “some degree of involvement, facilitation, or the provision of technical assistance by the Haqqani Network.”

The emergence of the NRF reflects tensions existing in Afghanistan regarding the broader ethnically exclusionary structure of the Taliban regime.

Now that the Haqqani network is occupying powerful ministries in Afghanistan – including the Ministry of Interior Affairs, which is being led by Sirajuddin Haqqani himself – this means that the Taliban regime’s ability to take decisive action against the IS-K is internally contested; hence, limited. But this limited ability is counterproductive insofar as it contributes to the regime’s wider failure to act as a responsible administration.

This inability has also allowed other insurgent groups to challenge the Taliban. The National Resistance Front (NRF), led by Ahmad Massoud, a Tajik leader, and son of Ahmad Shah Massoud (who was assassinated by Al-Qaeda days before the 9/11 attacks), has emerged as a major internal challenge.

On the one hand, the emergence of the NRF reflects tensions existing in Afghanistan regarding the broader ethnically exclusionary structure of the Taliban regime, and on the other, it shows how Afghanistan’s second-largest group is using the regime’s various failures to demonstrate its illegitimacy.

Afghanistan’s current economic situation is far from conducive to helping the regime consolidate its grip.

Targeting the regime, Massoud – who is based in Tajikistan – recently said that Afghanistan is now a ‘hub of terrorism’. While the NRF has not been able to deliver any significant blow to the Taliban, the group could become a major concern if Massoud succeeds in uniting the other 22 anti-Taliban groups known to the UNAMA, which have sprung up in the past year or so.

These groups do not claim to have received any help from the US/NATO allies – which is one reason why they have not been able to make a big impact. Yet, the fact that in-fighting is intensifying, according to the UNSC’s September 2022 report, shows that the Taliban regime is under attack from multiple sources.

On top of this, Afghanistan’s current economic situation is far from conducive to helping the regime consolidate its grip. As the United Nations Development Programme (UNDP) highlighted in a report published on 5 October, 2022 on the socio-economic situation one year after Taliban rule, Afghanistan is facing ‘cascading crises’ with nearly 20 million people – almost half of the total population – facing high and critical levels of food insecurity (for comparison, before the Taliban takeover, nearly 11 million Afghans on average faced food insecurity due to natural disaster, persistent drought and protracted conflict during March and May 2021). As the policy research organisation Afghan Analysts Network (AAN) reported in September 2021, people had already begun to sell household goods one month after the takeover, some in preparation for leaving the country, but others to buy essentials like bread.

The cost of a basket of goods has escalated by 35 percent nationally according to the UNDP (with wide variations reported in the provinces; areas like Ghazni and Kandahar may be experiencing as much as a 51 percent increase in the cost of a basket of goods). Nearly 700,000 jobs have been lost; in this, working women have been disproportionately impacted. A recent World Bank survey published in April 2022 found that 42 percent of surveyed women-owned private sector businesses had temporarily closed, compared to 26 percent of firms owned by men.

Afghanistan is facing ‘cascading crises’ with nearly 20 million people – almost half of the total population – facing high and critical levels of food insecurity.

Part of the reason for the crisis is the withdrawal of aid by donor agencies shortly after the takeover, as well as Afghanistan’s central bank, Da Afghanistan Bank (DAB), being abruptly cut off from the international banking system, with the US freezing Afghan central bank assets. Though there have been subsequent steps taken to address the unfolding humanitarian crisis, with the US government transferring USD 3.5 billion of the Afghan central bank’s money to a trust fund in September, Afghanistan is becoming a largely cash-only economy, facing a shortage in banknotes even as capital controls limit how much money can be withdrawn from banks.

With the economy being in a state of deep crisis and with reports of groups like IS-K offering lucrative salaries to its fighters, there is a significant risk that many starving Afghans may choose to join these groups to earn a livelihood. The Taliban regime appears to be at a loss about tackling this situation, even as it faces a losing battle in establishing its legitimacy internationally.

Salman Rafi Sheikh is a PhD researcher based at the School of Oriental and African Studies (SOAS), University of London. He is also the author of ‘The Genesis of Baloch Nationalism: Politics and Ethnicity in Pakistan, 1947-1977’. Salman covers Pakistan as a regular contributor to Himal Briefs. He can be reached at: salmansheikh.ss11.sr@gmail.com