Skip to content
Himal Briefs > The yam between three boulders

The yam between three boulders

How both US and Chinese diplomacy floundered in Nepal amid controversy over a development grant. 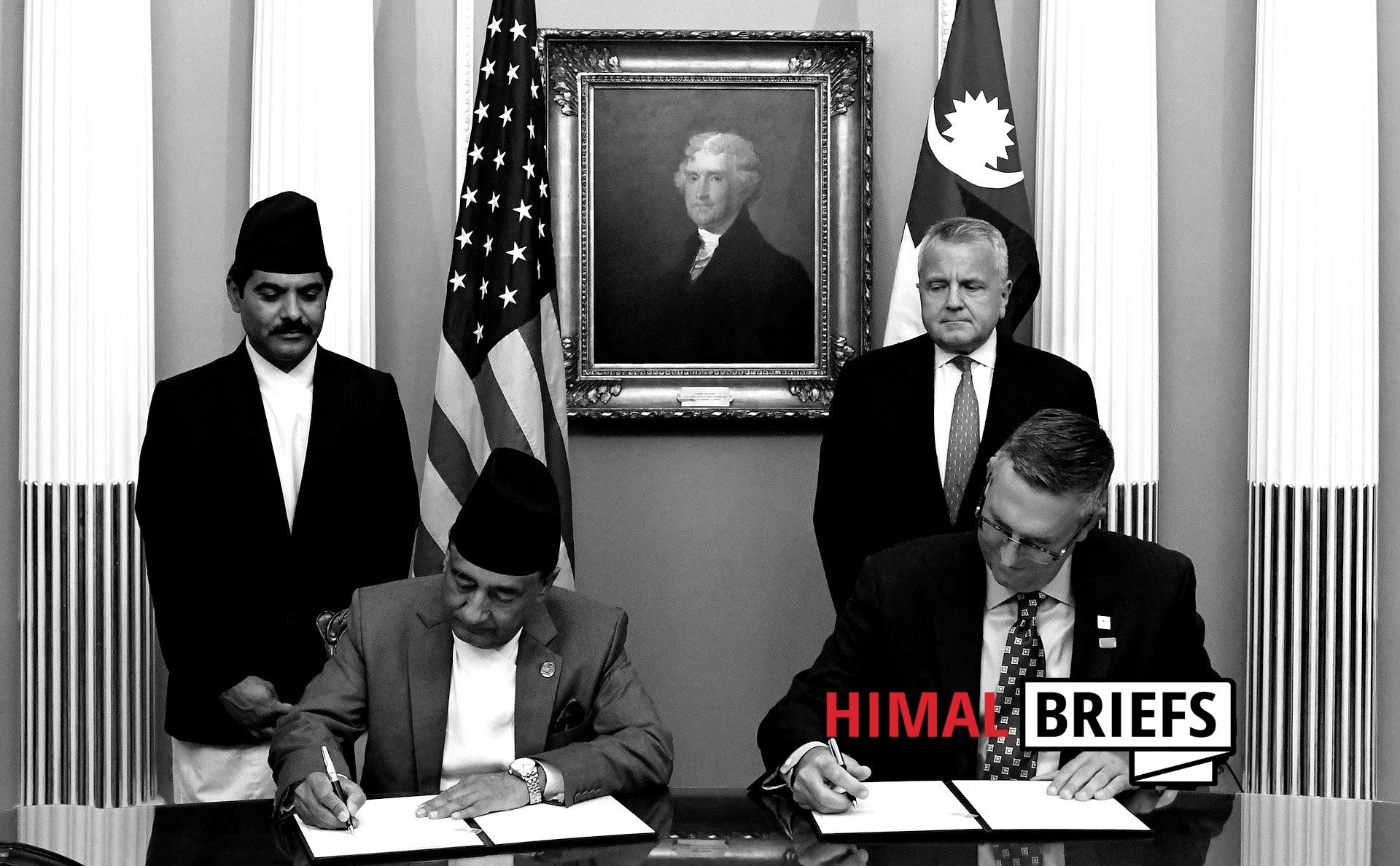 It began with conspiracy theories about American troops entering Nepal, and ended with a letter and a phone call.

When Nepal signed up to receive the Millennium Challenge Corporation (MCC) grant in September 2017, no one had expected the USD 500 million grant to bring the country to a standstill. Most would have thought the grant – Nepal’s largest yet – would have been welcomed into the country, since it primarily intends to invest in cross-border electricity transmission lines, and the Nepali prosperity dream is driven by its hydropower resources. And yet, February 2022 saw the return of street protests as a display of opposition to the grant, with public opinion heavily mobilised against the MCC, a foreign-aid agency of the United States government, and in turn, against the US itself.

Domestically, this brought the ruling coalition – led by Nepal’s traditionally liberal party Nepali Congress, but also including the Communist Party of Nepal (Maoist Centre) and a splinter faction of the current opposition Communist Party of Nepal (Unified Marxist-Leninist) – on the brink of collapse. But the lasting impact might be on Nepal’s external affairs. China expressed a direct interest in the politics around the grant, encouraging Nepali leaders to think twice before accepting a ‘Pandora’s box’, a gift that it observed would turn out to be a ‘difficult [meat] to chew [on].’ When the MCC was ratified by the Nepali Parliament on 27 February, China simply ‘noted’ the decision (any parallels to India ‘noting’ the promulgation of the 2015 Nepal Constitution are coincidental). Most recently, during his Kathmandu visit in late March, Chinese Foreign Minister Wang Yi reminded Nepalis that China would oppose “attempts to undermine Nepal’s sovereignty and independence, interfere in Nepal’s internal affairs, and play geopolitical games in Nepal”.

In all this, what is clear is that the US-China global contest has once more arrived in the Himalaya, and Nepal is where it likely will be centred, just as it was in the Cold War, before Nixon decided to reach out to Mao, when the Central Intelligence Agency (CIA) funded a Tibetan armed guerrilla movement out of the Nepal Himalaya. What Nepal will do from here on depends on its leaders’ skill and tact in negotiating a difficult period in global affairs for smaller countries.

There’s an old Nepali adage on its geographical position everyone loves to spout: that it is a yam between the two boulders, of India and China. With the MCC, a third boulder, represented by Uncle Sam, has now come to sandwich the yam.

Signed by both Nepal and US governments in 2017 to little protest, fanfare, or even attention, the MCC compact’s contentious career started around early 2019. A major stumbling block was that the agreement needed to be ratified by the Parliament before being implemented, which its opponents pointed out was unusual for foreign-aid agreements in Nepal. But their larger problem with the grant was their belief that it was part of a US scheme to encircle China. In December 2018, Nepal’s Foreign Minister Pradeep Gyawali was caught off-guard during his Washington DC visit when Mike Pompeo’s State Department announced “Nepal’s central role in a free, open, and prosperous Indo-Pacific”. Gyawali denied any Nepali interest in the strategic alliance, but some months later, when another US State Department official visiting Kathmandu acknowledged the compact was part of the Indo-Pacific Security (IPS) strategy, the matter snowballed from a YouTube controversy to a political conundrum of the highest order. The American mission in Kathmandu continued to insist that the compact was not a ‘deliverable’ of the IPS. But for many critics of the grant, their beliefs had cemented into facts.

With that came the conspiracy theories: Nepalis heard and read of theories ranging from having US boots on Nepali grounds, to becoming another Afghanistan were the MCC compact to pass, to the idea that Nepali women would be unsafe in its aftermath. Few foreign-aid issues have been so vigorously discussed across all sections of Nepali society in recent history; and few have been so thickly misinformed. Many of the country’s Communist leaders – including Pushpa Kamal Dahal ‘Prachanda’, chair of the Communist Party of Nepal (Maoist Centre) – argued the agreement could not be ratified in its current form, under which the treaty would supposedly take precedence over Nepali laws, refusing to even allow it to be tabled in Parliament. This is despite the fact that his party had been part of past governments that had actively pursued and negotiated the compact.

What’s interesting – and worrying to a certain degree, too – is that the MCC grant has turned into a salvo in the US-China contest for global supremacy.

In light of the mounting populist backlash against the grant, and upcoming local polls, the electoral calculation behind this change of mind was clear to many. Embarrassingly for Prachanda, even as he was publicly denouncing the compact, a September 2021 letter to the MCC, jointly signed by him and his coalition partner Prime Minister Sher Bahadur Deuba, was leaked to the press in early February 2022. In it the two committed to taking steps towards ratification in the following ‘four-five months’. Then came the ultimatum: days after the leak, US Assistant Secretary of State Donald Lu told Nepali political leaders, over separate phone conversations, that if the MCC compact was not ratified by 28 February, Washington would have to ‘review’ its relations with Kathmandu, a tone which many in Nepal felt was unusually explicit and sharp. The US also reportedly informed Nepalis that they believed the Chinese had encouraged or facilitated disinformation campaigns in Nepal, and that such ‘outside influence’ in non-ratification would be ‘deeply concerning’.

Rattled by American intransigence, Prime Minister Deuba rushed to secure support for the treaty in Parliament, while several left parties, nationalist groups and assorted fringe outfits mobilised its many organisations to protest the MCC in the streets. Despite the week-long protests, the accord was finally ratified with an ‘interpretative declaration’, which ostensibly reflected the Nepali position that the grant was solely aimed at development. In reality, this declaration added nothing that was not already in the treaty document itself, and instead was an instrument to spare the Communists in the coalition further embarrassment during an election year after this latest change of heart.

Few foreign-aid issues have been so vigorously discussed across all sections of Nepali society in recent history; and few have been so thickly misinformed.

What’s interesting – and worrying to a certain degree, too – is that the MCC grant has turned into a salvo in the US-China contest for global supremacy. Consider China’s displeasure and its vociferousness, which stood in contrast to the quiet diplomacy it usually pursues in Nepal. It first accused the US of “coercive diplomacy”, then asked “How can anyone accept such a ‘gift’?”, before finally ‘noting’ its ratification. If that weren’t enough, Global Times, China’s ‘wolf-warrior’ media outlet, has upped the ante, calling the MCC grant a ‘Trojan horse’ that undermines ‘the security and stability of China’s southwestern frontier’. Then, China Daily, the official English-language outlet of the Chinese Communist Party (CCP), ran an editorial that ominously concluded, “the consequences may be serious should any part of the compact be used against neighboring China… [I]t is in Nepal’s best interest to stay out of the US’ geopolitical games.”

While there is much to be said about the extent of Chinese influence in Nepal, one must note that the Chinese have suffered a series of setbacks in the post-pandemic years. Beijing had been favourable to a government under the unified Nepal Communist Party that had also decided to train its cadre in ‘Xi Jinping Thought’, although few of the Belt and Road Investment (BRI) projects had seen any progress since 2017, when Nepal signed up to the BRI. Internal discord led to a split among the incumbent Communists; and the current ruling coalition headed by the Nepali Congress has raised the issue of alleged border encroachments by China. Nepal has also not been too pleased with Chinese restrictions over cross-border trade under the guise of the pandemic. And now, with the MCC compact’s successful passage, Chinese perceptions about US encirclement on its Himalayan frontier seem to have been realised.

What is clear is that the US-China global contest has once more arrived in the Himalaya.

At the same time, the MCC episode has also been a debacle for US diplomacy in the country. First was its hazy association with the IPS. One could put it down to the Trump administration’s habitual bluster, but including the MCC within the IPS, at least in Kathmandu, where it was openly presented as a counter to China’s ‘debt-trap diplomacy’, was unlikely to help with public diplomacy. Second, once objections to the grant emerged, the Americans decided to go on the defensive, choosing to answer specific points of law. When they did finally pursue offence, insisting on a deadline and hinting that a refusal by Nepal would be seen as Chinese interference, their tone came off as adamant and undiplomatic.

There’s an old Nepali adage on its geographical position everyone loves to spout: that it is a yam between the two boulders, of India and China. With the MCC, a third boulder, represented by Uncle Sam, has now come to sandwich the yam. While the war in Ukraine has, for obvious reasons, raised concerns in the country about great-power interests and the extent to which they can go to secure them, the immediate concern in Kathmandu is how it can assure its neighbours of their interests while also implementing projects under the MCC grant, and pursuing other bilateral aid projects in the future. Domestic politics will see fallout too; the Maoists are facing internal discord over Prachanda’s double-dealings in the MCC episode. And charged popular opinions, and emotions, that accompanied the ratification will likely make their mark in the upcoming elections. One can be assured this is not the last one hears of the MCC in the country, nor of the hard choices smaller countries like Nepal will have to make in an era of increasingly unstable balance of power.

Amish Raj Mulmi is the author of 'All Roads Lead North: Nepal’s Turn to China' (2021). His writings have appeared in Al Jazeera, Roads and Kingdoms, and Mint Lounge among others. He is consulting editor at Writer's Side Literary Agency. Amish covers Nepal as a regular contributor to Himal Briefs.