The long walk home for migrants, tech and surveillance in the time of COVID-19, pardoning a convicted army officer, and more. 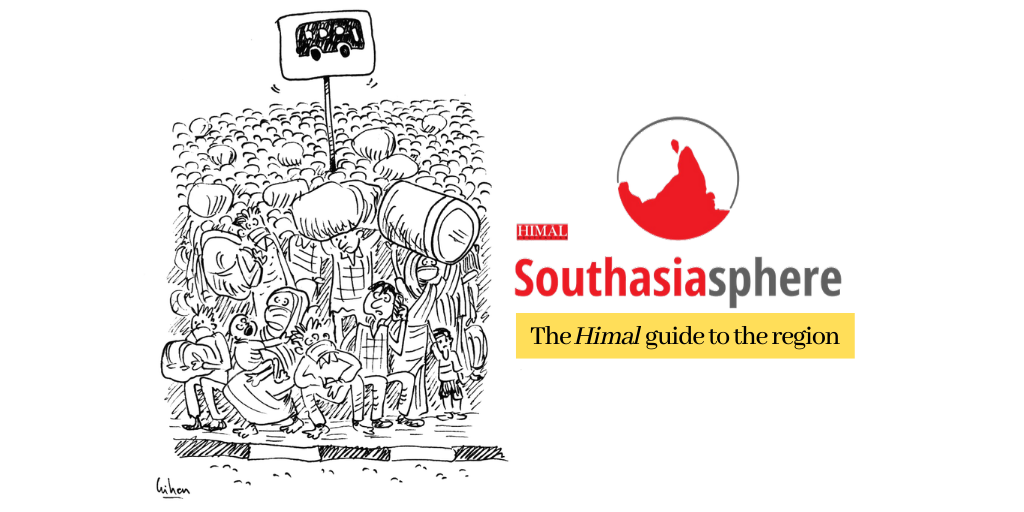 This is the second edition of Southasiasphere, our guide to developments from the region. We’ll be monitoring the region to bring you fortnightly updates on political, legislative, economic, environmental and diplomatic events. Our aim is not to flood you with information, but provide clear analysis and outlook. On our radar are not just headline-grabbing news, but also stories ignored by corporate media both within and outside the region. As this comes at a critical time of global pandemic, when many seek reliable information, we’re making Southasiasphere free to all for now. Do check out our membership plans and support our work.

In our first edition of Southasiasphere, we focused on how Southasia’s migrant workers abroad were affected by COVID-19 travel bans. With countries in the region now under lockdowns, the plight of migrant workers in Southasia is abundantly clear.

In India, Prime Minister Narendra Modi announced a 21-day nationwide lockdown on 25 March with just hours notice, leaving tens of thousands of urban migrant workers no choice but to walk hundreds of kilometres back home. At least 22 people have died along the way, with multiple reports of police mistreatment and brutality.

Sri Lanka was able to avoid such extensive disarray, but announcements that public transport would be suspended gave the public only three hours to catch the last crowded trains and buses from Colombo back to their hometowns. The country’s Free Trade Zone workers – left stranded for several days in boarding houses – were packed into buses and asked to return to their hometowns without their salaries.

Bangladesh, on the other hand, began with a ten-day ‘general holiday’ starting 26 March instead of a lockdown to prevent panic. Workers were notified as early as 20 March that bus, train and ferry services could be halted in the near future, giving them a window to return home. The holiday has been extended to 11 April.

Meanwhile, migrant workers crossing national borders to return to their homes were met with fear and mistreatment. Hundreds of Nepalis, mostly daily-wage labourers, were stranded on the Indian side of the Darchula border with Uttarakhand, after Nepal refused to open its sealed border. Footage of a Nepali man who swam across the Mahakali River but was later apprehended by the local police gave viewers a damning reality check for how states continue to treat its oppressed citizens. Many more, from both India and Nepal, are now in quarantine centers at various border points.

With millions of migrant workers spread across Southasia’s cities and no certainty about when the lockdowns will end, we will continue to monitor how governments in the region manage this burgeoning humanitarian crisis.

Technological responses to COVID-19 in Southasia have ranged from creative solutions to old-fashioned desire for state surveillance. Bangladesh is telecasting classes for secondary-school students on national television. In Kerala, an Eastern Catholic church will be live streaming their liturgical celebration. Mobile phone users in Sri Lanka hear trilingual tips on COVID-19 prevention every time they make a call. Meanwhile, the Maldives Parliament has gone virtual, with as many as 71 of the 87-member Majlis logging in for the first web conference call – a decent attendance for any parliament, online or offline.

Yet governments in the region are also using it to gather data, the manner and scale of which suggest that emergency responses could easily end up looking like surveillance and data harvesting. In India, people suspected of being COVID-19 positive in Karnataka will soon have to send hourly selfies with geotags via a government-run app. Failure to report could land them in a mass quarantine centre. The central government as well as other states, like Telangana, have been using similar apps to harvest data locations.

In Sri Lanka, government apps like Rakemu Api, which allows users to report a suspected case of COVID-19, have been criticised for not having privacy built in, with little to no information on who will be able to access the data harvested and for how long.

Bhutanese journalists, meanwhile, reported that the government was planning to release an app to monitor those in quarantine, adding that it could be a crime for a registered person to switch off their location.

It’s all becoming slightly too ‘Big Brother’ for our taste. Governments in the region have a bad record when it comes to privacy protection and data ethics. The current crisis might give governments unprecedented opportunity to digitise parts of our lives, but flawed data practices, once instituted, might be hard to reverse, post COVID-19.

President Gotabaya Rajapaksa’s pardoning of a soldier who was convicted of killing civilians, including children, has raised serious questions of accountability and due process in Sri Lanka. Former Staff Sergeant Sunil Ratnayake was sentenced to death in 2015 for murdering eight Tamil civilians in Mirusuvil, a town 16 miles east of Jaffna. The judgment over the killings in 2000 was a rare conviction of a case where security personnel had been accused of war-time violations. Notably, during his election campaign last year, President Rajapaksa had pledged to release army officers accused of abductions and forced disappearances upon his victory.

The president’s special pardon comes at a time when many parts of the country, including the capital, have been under continuous curfew for several days due to the COVID-19 outbreak. Any public show of dissent is near impossible, not to mention illegal. The timing of the pardon and the nature of the case has, therefore, led many to wonder if this is just another attempt to seek political advantage amid an ongoing public-health crisis.

The United States has threatened to cut USD 1 billion in aid to Afghanistan, after the country’s divided political leadership, represented by President Ashraf Ghani and his rival Abdullah Abdullah, failed to settle their differences on disputed 2019 elections.

Bangladesh released opposition leader and former prime minister, Khaleda Zia, who had been jailed for corruption, on medical grounds at a time when there will be limited outcry as the country battles COVID-19.

In Nepal, a web-development company hacked into a news site it designed and developed (KathmanduPress.com) and deleted a story which implicated its owners in a major corruption scandal on the import of COVID-19 test kits.

See Southasiasphere: ISSUE #1: Covid-19 in Southasia, civilian government vs the generals in Myanmar, postponed elections in SriLanka and more.