What you need to know about Bhutan’s parliamentary elections being held on 18 October. 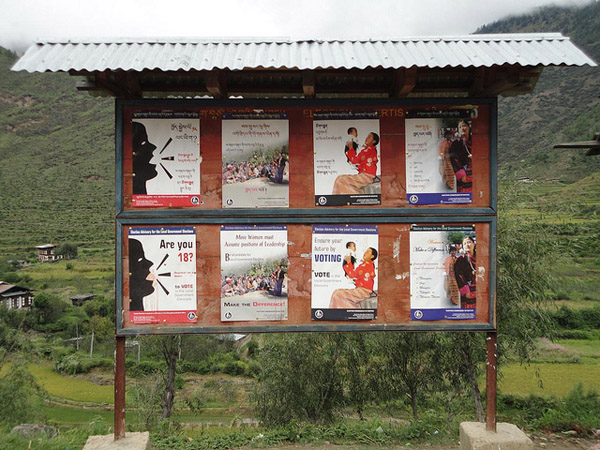 On 18 October 2018, Bhutanese voters will go to the polls in the country’s third parliamentary election to decide which party will lead the young democracy for the next five years. Regardless of the outcome, we can be certain that Bhutan will see a new party in Parliament. As Bhutan follows a run-off system for electing members of its lower house, the National Assembly, only two parties proceed from the primary to the secondary round. In a record turnout of over 54 percent of the registered voters at the primaries on 15 September, the ruling People’s Democratic Party’s (PDP) third place was seen as a major upset, leaving the Druk Phuensum Tshogpa (DPT) and newcomers Druk Nyamrup Tshogpa (DNT) in the final round.

In Bhutan’s first-past-the-post system, candidates of the two parties that lead the run-off election are pitted against each other across the country’s 20 districts, each of which has between two and seven constituencies. The party that commands the majority in the 47-seat Parliament will put forward its leader as the prime ministerial nominee, who is then appointed by the King of Bhutan. The electoral system not only forces the National Assembly to accommodate only two parties at a time, but also has provisions discouraging the creation of new political forces. For instance, a party must present a candidate for every constituency throughout the country in order to participate in the election.

Many pundits had expected the ruling People’s Democratic Party to breeze past the primaries due to its popularity for having jump-started economic growth and resolved the shortage of Indian Rupee in its reserves, critical for the country’s trade. However, a strong anti-incumbent sentiment appears to have shifted the currents. Druk Nyamrup Tshogpa, a party registered just prior to the 2013 elections, garnered 32 percent of votes in the primary round, with Druk Phuensum Tshogpa coming a close second with 31 percent. The Druk Nyamrup Tshogpa received much exposure due to its performance at constituency-level debates and has risen to popularity with its focus on healthcare issues.

Meanwhile, Druk Phuensum Tshogpa, which was the first political party in power in democratic Bhutan, was helped by its unofficial merger with a smaller political party, the Druk Chirwang Tshogpa (DCT). This election, rather than risking further weakening of the party by a poor performance in the primaries, the Druk Chirwang Tshogpa leadership chose to dissolve the party and join the ranks of Druk Phuensum Tshogpa.

Economic concerns rank high in the campaign manifestos of both the parties. Despite strong economic growth, clocking in at 8 percent in 2017, Bhutan has seen high youth unemployment and rising external debts, amounting to 108.6 percent of its GDP as of 2017.

Bhutan is also reliant on subsidised access to Indian gas and kerosene, a dependency that had political consequences when India briefly withdrew those subsidies in the midst of the 2013 National Assembly elections. Perhaps in response to this, the Druk Nyamrup Tshogpa has proposed the introduction of biogas and electric cars.

The Druk Phuensum Tshogpa manifesto, on the other hand, pledges to continue Bhutan’s economic growth with a continued focus on the traditional sectors – hydroelectricity and tourism. This is despite the party having borne the brunt of the Indian withdrawal of subsidies, which was perceived as a reaction to the party’s growing interaction with Chinese officials, and arguably cost them the 2013 elections. Bhutan faced another geopolitical crisis in June 2017, after a military standoff between the Indian and Chinese armed forces lasted for over two months in Doklam, a disputed territory near the Bhutan-China border, located close to the two countries’ trijunction with India.

Both Druk Nyamrup Tshogpa and Druk Phuensum Tshogpa also talk about reducing inequality and have promised to strengthen public education and healthcare, positions that have less to do with party ideologies than the popularity of Bhutan’s social-safety network. However, policy priorities differ in key areas. The Druk Phuensum Tshogpa manifesto has prioritised reducing the trade deficit, expanding the role of the private sector, minimising government intervention in the economy, and expanding access to finance. Druk Nyamrup Tshogpa’s manifesto proposes incentivising agricultural work, making teaching a sought-after job, and increasing public-sector wages, as well as focusing on healthcare.

Given how close the results of the first round of elections were, it is difficult to say which party will lead the next government. However, three successive changes of government over three parliamentary elections reflect popular enthusiasm for democratic exercise among the Bhutanese electorate, and a refusal to entrench a two-party system in a polity which systematically discourages smaller parties from emerging.