Skip to content
Film > Death and education at a film festival 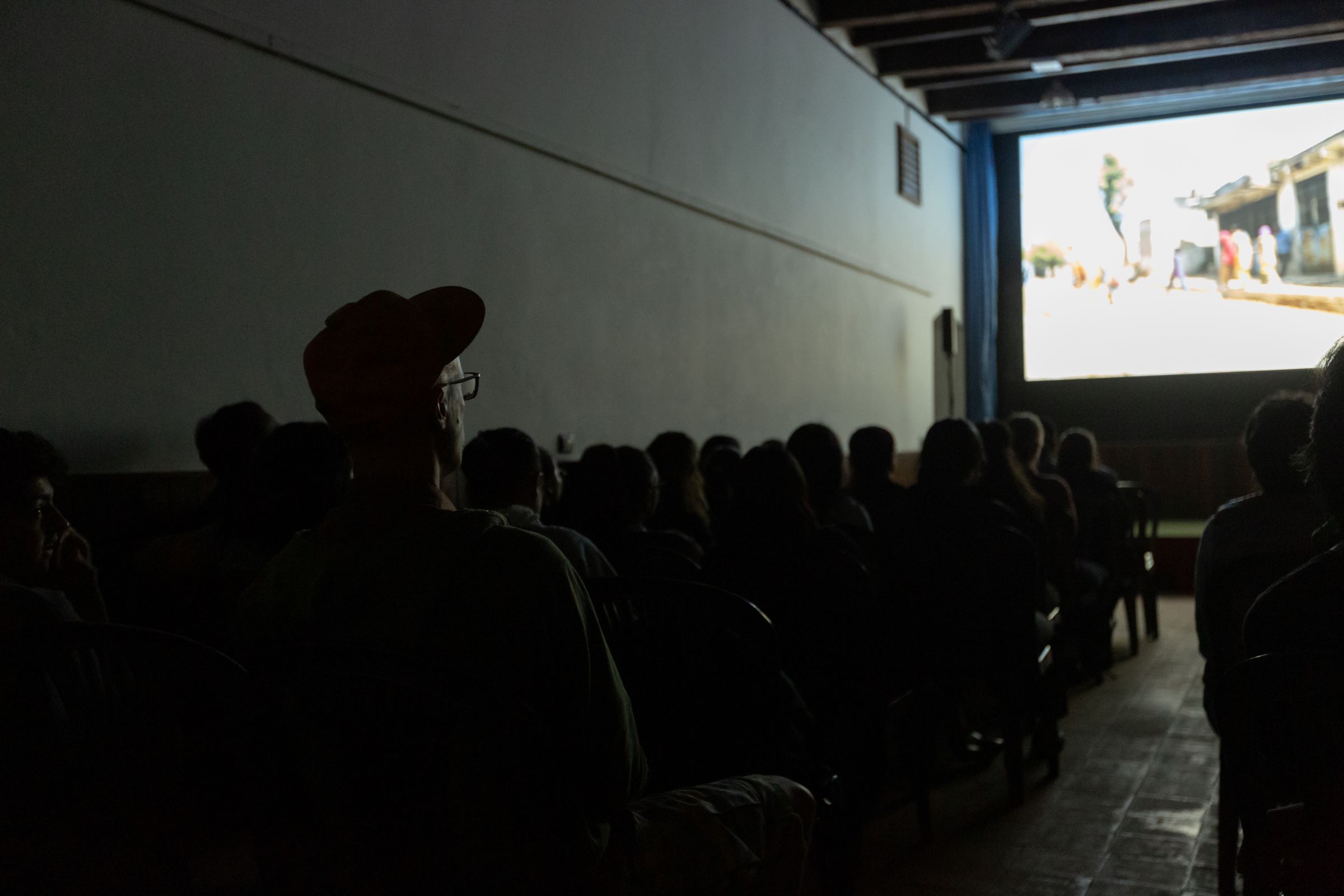 Death and education at a film festival

Film Southasia 2019 provided a glimpse of what Southasia is thinking, feeling, and creating.

Rushing from one screening to the next during the latest iteration of the film festival Film Southasia, across the sun-soaked inner courtyard of Patan’s Yalamaya Kendra, or up meandering stairways of the century-old structure, a number of themes surfaced in my mind. Held in mid-November 2019 in what was its 12th iteration, the biennial festival had simultaneous screenings almost all the time, and one was forced to make uninformed choices along the way. Sometimes I struck gold and left one of the three halls feeling energised and deeply troubled. At others, a little exhausted and perhaps even subdued. By the time the third day of the event drew to a close, I was surprised by the slow and steady emergence of an interweaving of two of the themes that I had been following instinctively – death and education. Beauty, love and resistance, too, had been prominent subjects of documentaries. But it was death that somehow managed to entangle itself quite irrevocably around knowledge, or its dissemination.

A prime weapon in Lankesh’s battles was the widely respected magazine Gauri Lankesh Patrike, a vernacular weekly that she edited and published to counter misinformation

For me it began with Pradeep K P’s Our Gauri, an homage to Gauri Lankesh – a woman, who until her last breath actively countered the upsurge of communalism in India through her writing, publishing and activism. Highlighting her three major fields of engagement no doubt comes across as banal when written in eulogy of someone whose murder in her Bengaluru home had caused waves of mass uproar and resistance in unexpected corners of the Subcontinent and beyond. But the film evaded this trap of predictable eulogising by opening a window on Gauri the friend, the sister, the human. A series of interviews with family members, colleagues and friends; people on the street who read her deeply political pieces with reverence; people on the street who had joined marches protesting her murder; and most importantly, youth activists she had mentored in various college campuses in India, including the distant Jawaharlal Nehru University in Delhi, replaced her image as an iconic figure of resistance with a far more accessible portrait. It was the portrait of a woman who loved and protected fiercely, and fought her battles even more fiercely.

A prime weapon in Lankesh’s battles was the widely respected magazine Gauri Lankesh Patrike, a vernacular weekly that she edited and published to counter misinformation; to mobilise the marginalised, especially those belonging to the lowest rungs of or even outside the oppressive caste system; and to unite the various factions within the pan-Indian leftist movement. Pradeep K P, the director of the film, and a long-time friend, had been shooting footage of her for years. These, when combined with interviews of friends, family and supporters recorded after her death, brought us the story of a woman who fought for the right to education, knowledge and information, and the empowerment that this inevitably brings in its wake. Our Gauri will no doubt mean different things to different people. To me she will remain the one that relentlessly struggled against upper-caste and right-wing-engineered opacity and exclusion, both of which must necessarily revolve around the creation of and access to information, to knowledge and the freedom that entails. Her annihilation was no doubt a structural necessity for this opacity to remain intact.

Less than 24 hours later I was walking out of the venue’s Baggikhana Hall, seething with a feeling of helplessness, facilitated by FSA’s carefully chosen inventory of films. We Have Not Come Here to Die was a gritty revisit to the ‘why’s that preceded and followed Dalit PhD student Rohith Vemula’s suicide in Hyderabad in 2016. The swirl of campus politics at the University of Hyderabad, of the agendas of various political parties and the university administration, and of caste and discrimination had held us in their thrall for three years now. His suicide note had been widely circulated on the internet and print media. We cannot but know that he equated a person with their mind, with “a glorious thing made up of stardust”, as he wrote in his final letter.

India’s higher-education system, with its glorification of the unthinking and the unquestioning, is successfully raising generations of uninformed individuals at its best science and engineering institutions.

And yet the series of interviews, cleverly montaged together by director Deepa Dhanraj, with Vemula himself and then his close friends, family and acquaintances, comrades, the university faculty, other people he had never met but who now supported his cause or what his name stood for now – all bolstered by a rational retelling of incidents leading up to and away from the event – drove home a curiously simple message.  A young man, who came from a community where nobody had ever made it this far academically, was keen on making himself an example of how far education could improve material conditions and free one’s mind and body from the deadly grip of what Vemula called the “immediate identity and nearest possibility.” His own road to freedom, possibly his community’s too, lay through knowledge acquired via the existing higher-education system – except that the road had been blocked long ago by marginalising institutions like the university administration. Access to information, to knowledge, must remain controlled for such institutions to be able to perpetuate themselves. Why does it come as a surprise to the privileged then, that death must necessarily insert itself into this game?

Meanwhile, An Engineered Dream – directed by Hemant Kumar Gaba that went on to claim the first Special Mention by the jury at FSA – was not about physical death, but an intellectual death so complete and so chilling that it left us viewers numb with horror. This was a bloodcurdling tale of death by education. An apparent documentation of stories of success, the film tracks a handful of students from the time they arrive in Kota, a city in Rajasthan that, according to the documentary, “attracts 200,000 teenaged students a year from all over India, who come to attend coaching schools that help them prepare for the undergraduate competitive exams of prestigious colleges.” They do not come to be coached in the humanities, or ‘arts’ subjects, but to crack the competitive exams that will let them enter the technocracy through engineering and science courses. Expected to study a minimum of 15 hours a day, every day, for two years, in preparation for entrance exams that have an acceptance rate of less than one percent, the students live in tiny rooms and are under unrelenting pressure from teachers, peers and, worst of all, their own families.

The camera follows the protagonists over two years, capturing them in their private moments of despair and the unwavering courage they show in public against academic odds. It seamlessly unravels a story of tacit and explicit psychological torture that tames and configures them into mechanised creatures of subservience. One of the lucky ‘toppers’ is found jubilant at the end, but to our horror, we find him unable to distinguish between a Master’s degree in technology and that in science. He will, no doubt, go onto win many laurels and will soon be sitting in one of the boardrooms that define India’s future. Without even a single, explicit comment from the director, the audience is suddenly faced with the systematic dissolution of intellect in contemporary India, of freedom of thought and speech. And suddenly we realise that the increasing political apathy and fundamentalist sectarianism has its roots less in the country’s uneducated poor, and much more in the ‘well-educated’ youth. India’s higher-education system, with its glorification of the unthinking and the unquestioning, is successfully raising generations of uninformed individuals at its best science and engineering institutions. An Engineered Dream is a brilliant and quiet documentation of that engineered death of a nation’s intellectual life and capacity for independent thought.

Other documentaries that swirled around the same entanglement between death and knowledge included: After Sabeen from Pakistan; Kabul, City in the Wind from Afghanistan; Rohingya’s Dream from Bangladesh; Are You Going to School Today?, After Prayers and Lynch Nation from India; and Trapped in Qatar from Nepal. Along with other films showcased over four wintry days in Kathmandu, the 64 films gave us a glimpse of what Southasia is thinking, feeling, and creating.

Kurchi Dasgupta is a Southasian artist, art writer and actor based in Kathmandu and Kolkata.