A look at the lives of garment workers in Gurgaon and Tirupur. 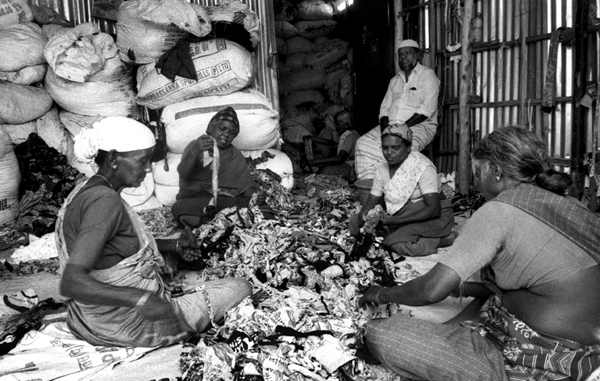 A workshop in which excess fabric is collected, separated and sent for pulping, later to be spun into thread.

In mid 2012, after having started working with garment workers in Bangalore, I was compelled to gain a deeper, pan-Indian understanding of the industry. Gurgaon and Tirupur, at different ends of the country, are, apart from Bangalore, the other two places in India on the global map of garment manufacturing districts.

Gurgaon
Making my way to Kapashera on the outskirts of Gurgaon – which borders the national capital New Delhi – the grotesquely large buildings emerging from the fog looked right out of a Chris Marker film. When the sun slowly eats up the winter fog, a flurry of people can be seen grappling with the unending rat race. Gurgaon, a city still under construction that contains Asia’s largest Special Economic Zone, is now home to thousands of rural migrant workers uprooted by the agrarian crisis. They stitch and sew for export in over 1500 manufacturing factories, or units. Due to stiff competition from neighbouring countries like Bangladesh, the once sought-after tailor has been replaced in India by operators of machines mass producing ready-made garments for the global market.

In Gurgaon, the workforce consists mostly of men – nearly 80 percent of over 200,000 employees, sewing mainly women’s garments. The majority of workers come from Uttar Pradesh, Bihar, Jharkhand and West Bengal. They are tucked away in tenements in areas such as Kapashera, where hundreds of matchbox-sized windowless rooms have been constructed, sometimes by the owners of the export houses or manufacturing units, sometimes by local landowners, charging around INR 2000 per month. Five to six workers jostle for space, sharing costs and food, but strangely never communicating with one another.

I found it rather unnatural not to talk to or know one’s neighbours, but it seems that competition is encouraged, and that the workers themselves have been desensitised to their surroundings by the repetitive nature of their jobs: working late, cooking food and sleeping, to be repeated again and again. Workers are all identified, even between themselves, by their room numbers, not names. The only conversations one hears between them are about the salaries paid by different companies. This is how workers explore their possibilities with different employers. They never stay with a company for more than six to eight months, finding work with better pay when they can.

Workers in Gurgaon’s factories toil 15 hours a day or more on most days of the week, for which they are rarely duly paid. I met workers who were fired over banal arguments, such as eating lunch in the place demarcated for supervisors. Sometimes events turn ugly: in May 2013, several employees ganged up and killed their supervisor and his family. A worker was pressured into working overtime, and made the mistake of answering a phone call while on duty. A heated argument ensued, and the supervisor hit the employee. A week later, the supervisor was murdered, and the murderer has been absconding since. These examples reflect the abuse of power supervisors can exercise, strengthening hierarchies which, in turn, incite rebellion and violence.

The surplus of jobs enables the worker to choose when to leave and when to work. High export demands mean that anyone who can operate a machine will find work at any time. Many workers visit family during the extremely hot summer months, and also during winter. The stories of stretching oneself for survival circulate within the workers’ colonies. One feels almost like a tourist, with the groups of relieved or curious workers welcoming you on your visit or thanking you for it.

Tirupur
Tirupur is a tumbleweed town in Tamil Nadu that lives off the garment manufacturing industry. Around 90 percent of the population (men, women and children) are directly involved in making clothes, both for export and for local markets. It is one of the largest foreign exchange earning towns in India, at a staggering INR 12,500 crore (USD 2 billion) per year. An estimated 8000 units operate, many of which specialise in knitting and stitching, with the rest embroidering, dyeing, bleaching and printing. The knitting and stitching units employ the largest numbers, an estimated 500,000 workers. The floating seasonal workforce pushes the numbers up further.

The feminisation of the workforce is becoming more apparent in this area. Women, particularly the young, are recruited from within Tamil Nadu and Kerala under various schemes, mainly in an attempt to counteract attrition. The ‘Sumangali and Hostel’ scheme is popular and prevalent, though not legally allowed to operate in the garment industry. The Sumangali scheme is a form of labour camp that recruits girls of 11 to 17 years on three to five year contracts. They receive the paltry sum of INR 1000-2500 per month, and on completion of their contracts are given a further lump sum of 45,000 for a three year contract, or INR 60,000 for five years. The girls, provided with board and lodging, either on company premises or at other locations, are with very little facilities and no benefits such as the employee provident fund or state insurance.

In the last few years, several NGOs, with the help of the state police, have successfully conducted surprise raids, rescuing young women, girls and boys from various camps, and providing them with schooling and shelter run by NGOs, such as SAVE (Social Awareness and Voluntary Education). The organisations admit that the employers are often politically well-connected and, in most cases, know how to avoid raids.

In this town, almost every home with enough space is converted into a makeshift production unit. The work in these spaces ranges from trimming and stitching to ironing and weaving. With rising global demand, work is outsourced to these houses. Some of the smaller setups, where a family of five to eight people work (neighbours included in some cases), are usually built adjacent to the house, or as an extension, and produce anywhere between 800 and 1000 items of clothing per day. During the first M G Ramachandran government in Tamil Nadu, in the late 1970s, many families were given benefits such as pension funds and insurance to set up handlooms in their houses. Many families still operate these looms, weaving towels, lungis and floor mats. They are paid according to the number of pieces produced, usually earning INR100 to 150 per day. The pension is fixed at INR 1000 per person per month, though due to complicated bureaucratic procedures, many fail to receive it.

Despite producing for glamorous international retailers, workers are unjustly treated. With global attention on a new Indian government, we can only hope that workers come to be treated more humanely and paid their dues.

~Rudra Rakshit is a freelance photographer and writer based in Bangalore, working on the migrant workforce.