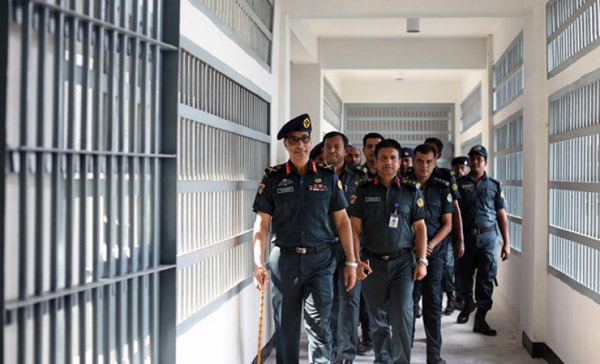 Breakfast at the jail canteen is parathas, egg mamlet and veggie daal. It takes me back to my university cricketing days, grabbing lunches at the Dhaka Medical College Hospital (DMCH) canteen across the road from the cricket ground, amid the scalding black humour of med students fresh in from their cadaver classes.

I, Rahnuma and Rini have come to the Dhaka Central Jail in Keraniganj to visit photojournalist and activist Shahidul Alam. He was sent here on 12 August, after a scrambled court hearing where his legal counsel could not be present. Keraniganj, across the river Buriganga, is out in the boonies. The jail is a new one, shifted in July 2016 from the old building, a centuries-old, dank, colonial-era structure in the tightly wound alleyways of old Dhaka. Here, in contrast, is space, air and empty fields. We buy visitor passes at an open air shed, across from the modern-looking grey concrete jail complex. A high perimeter wall encloses multistoried buildings that look like student dorms. They house the inmates. The building for meeting with the inmates is embedded in the perimeter separated from the main building; further down are the main gate and the administration block, with a circular driveway and branded signage. The overall effect is vaguely Low Rent Corporate, where, unlike the old one, traditional reckonings of sinners and gallows seem out of place.

Shahidul Alam has been charged with offences listed in Section 57 of the Information Technology and Communication Act (ICT) Act 2006 (amended in 2013) relating to dissemination of ‘material’ harmful to public order and the image of the state. I had looked up the act, curious to know whether arrests could be made without a warrant. And found that indeed, they could. The original act had specified arrest warrants, but the 2013 amendment had stripped away that ticklish requirement. Its origins, like the old jailhouse, lay in the colonial era, in the ‘defamation’ clause of the penal code. To make an arrest the colonial authorities had to issue an arrest warrant. The emancipatory postcolonial state saw no such need.

When the doors to the visitors’ building open, the queue outside surges in like sea tide. We too are swept along. And immediately, my impression of a modernised facility is shattered. Inside, it stinks; the walls reek of lavatorial damp. There are two small rooms on the ground floor and two upstairs. In each room, hot and confining, is a wide concrete divider topped with three layers of iron grille mesh. The desperate rush to get inside is to secure a standing space at the divider closest to the prisoner on the other side.

In 2006, I had accompanied a legal team to Satkhira in southern Bangladesh to meet the head of an NGO thrown in the clink by the army. By chance, I had witnessed visiting time at the colonial-era, rather pretty Satkhira jail, where a mass of visitors screamed domestic updates into a ten-foot funnel sloping downward to prisoners bunched at the other end yelling back. The noise was indescribable. And at the Keraniganj jail, it is the same degrading principle at work, denying visitors and prisoners individual dignity.

We manage a corner spot. As inmates appear on the other side the shouting begins, getting progressively louder. Suddenly, Shahidul Alam appears, accompanied by two youths who seem to be chelas (hangers on); jails are microcosms of wider society, and life inside mimics life outside. He looks relatively undamaged, and in the din, we exchange greetings and information on cell conditions, health and doctor reports as best as we can. He wants books. We inform him of the global campaign for his release. Some legalese. A little later we are done and say goodbye. He raises a fist.

Outside, we open an account for him, so he can purchase items from the prison goods store. We buy oranges that will be delivered to him. We walk back across the field to the parking lot, get in the car and get onto the Dhaka-Mawa highway, driving through the semi-urban squalor of dingy malls and tenement housing back to the city.

I join Rahnuma and Saydia on their daily visit to Shahidul Alam. Like the last time, we join the queue in front of the visitors building. It gets warm; the crowd swells. Mostly women, many with children, many in burqas and cheap sandals, some with kohl-rimmed eyes, chewing paan. The women shoulder the heaviest burden of the penitentiary, with the daily grind of running the household and raising the children with the menfolk behind bars.

This time Shahidul Alam looks thinner and sounds jittery. He is having flashbacks about his abduction, insomnia from listening to the tales of other prisoners. Pain in his jaw; he can’t eat solid food. Problems with his eyesight.

But, over the next few days, there are reports of gradual improvement, of medical check-ups and necessary medication. The result of the numerous applications that wend their way through the maze of bureaucratic and judicial processes.

On 7 September, following court orders, the prison authorities grant Shahidul Alam ‘Division I Under Trial Prisoner’ status. He is moved to a cell with an attached bathroom, a bed, mattress, pillow, table fan, table and chair, shared access to a fridge, and an attendant. He requests sneakers and shorts for jogging, having resolved to get “fighting fit”; once out, he says that he plans on working on prison reform.

Mid-morning. The Metropolitan Sessions Court in old Dhaka is a sweltering bazaar, humming with lawyers, police, prisoners, their friends and families, and vendors. I, along with others, have come for the bail hearing of Shahidul Alam.

The issue of bail for Shahidul Alam has been a twisting tale so far. On 14 August, a bail petition was filed with the city’s Sessions Court, which set 11 September for the hearing, roughly four  weeks later. His counsel filed repeated applications to advance the hearing date. All were summarily rejected. The application went to the High Court, but after delays, on 4 September one of the two-member bench withdrew from the hearing, saying they felt “embarrassed” to hear the petition, whereupon it was routed back to the Sessions Court for the hearing on the original scheduled date.

The hearing seems to take forever. We wait, and wait, in the corridor outside the courtroom, wiping sweat from our faces. At last, the lawyers emerge from the courtroom.

Khademul Islam is a writer and editor of the Bangladeshi literary journal Bengal Lights.