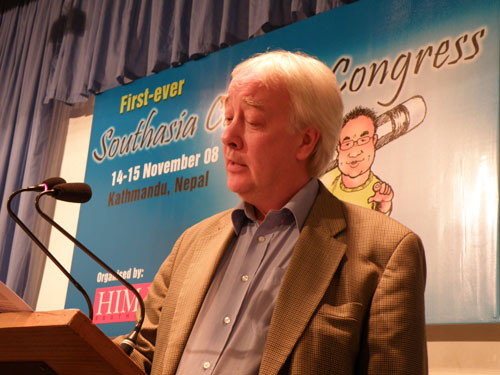 “Fleet Street has been a magnet for journalists around the globe ever since the world’s first daily newspaper, the Daily Courant, was published in London on 11 March 1702. Amongst the foreign journalists who have come to Britain over the past 300 years have been a number of cartoonists and caricaturists, especially after the launch of the satirical Punch magazine in 1841.

Abu Abraham went to London in 1953 for what he intended to be a three-month visit, and eventually stayed on for 16 years. During that period, he became the first-ever political cartoonist on the Observer, the oldest Sunday newspaper in the world, founded in 1791. He later worked for three years on the leftwing weekly Tribune; and from 1966 to 1969 he was also a daily cartoonist for the Guardian, which described him as “the conscience of the Left and the pea under the princess’s mattress”.

Click here for the full text of Marks speech, also available in the hard copy of Himal Southasians December issue.