Skip to content
Reviews > On the stage and off

On the stage and off 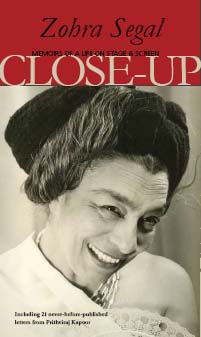 Close-up: Memoirs of a life on stage and screen by Zohra Segal, Women Unlimited, 2010

There has long been a relative paucity of autobiographical writings by women, so those that have been written have come to be seen as significant. Perhaps the mainstream did not take such works as seriously as those by men; over the years, such narratives have at times been criticised as overly focusing on the personal, or for not being ‘creative’ enough. In more recent years, such views have been critiqued by feminists who suggest that the binary of ‘personal versus professional’ is false. In this light, Zohra Segal’s new memoir is important both as offering a strong example of women’s autobiography writing, and for shedding light on their experiences of performances, an area that has been insufficiently explored. Writings on theatre history have tended to marginalise the contributions of women, with Segal herself having received significant public acknowledgement but largely pertaining only to her involvement in film. In fact, as she details in her Close-up, her contributions to a spectrum of Southasian culture were wide, significant and exciting.

Segal is an accomplished dancer and choreographer who learned modern dance in Germany. In 1935, she joined Uday Shankar’s dance institute in Almora, in what is today Uttarakhand, and proceeded to travel extensively with the troupe to Japan, West Asia, Europe and the US. Eventually, along with her husband, Kameshwar Segal, she acted as co-director for the Zoresh Dance Institute, in Lahore. Due to political turmoil during Partition she shifted to Bombay, and it was here that she became involved with theatre, starting with the Indian People’s Theatre Association (IPTA) and then with Prithviraj Kapoor. She also tried her hand at directing films and, over the years, appeared in numerous Hindi and English films as well as on television. Oddly, although Segal’s participation in the IPTA constituted a significant segment of her life, this memoir does not delve into her politics.

Her collective contribution becomes particularly significant when one looks at the larger social context of the times, when women from ‘respectable’ families did not tend to take part in public performance. A female performer was perhaps the most unsettling of figures, rupturing many social boundaries, and such women were seen as licentious, immoral, impure and essentially ‘loose’. In fact, Segal belongs to an aristocratic family, in which women observed purdah; her schooling was also from Queen Mary’s College, in Lahore, which followed strict seclusion. She writes of how she blushed when her cousin, having found out that she had an interest in performance, had asked her to pretend to be a girl who has just received a letter from her lover, telling her that he will not come that night. She recalls being mortified at the very thought.

Blossoming
How, then, to explain Segal’s extraordinary career path? In fact, this can be understood in the broader context of her family background – in fact, her family was relatively liberal for the times – coupled with an effervescent personality. Her parents took a progressive stance regarding the education of their daughters at a time when few thought of sending girls to school – and, certainly, never to a boarding school. Yet before her death, Segal’s mother left explicit instructions that the money from her property should be used for the education of her children, especially her daughters. Unfortunately, Segal does not provide details on how exactly her mother arrived at this notable decision, nor does she include information on her mother’s background. Although living in Dehradun at the time, Segal and her sisters were sent away to Queen Mary’s, in Lahore, which she recalls feeling as though they were going to another country.

Some of Segal’s other family members were also rebels of their times. Her maternal uncle, for instance, studied medicine in Edinburgh, against his father’s wishes that he not go abroad at all. As she grew, her uncle became a strong source of inspiration and support to Segal, and was eventually supportive of her decision to pursue a career rather than simply get married after completing her schooling. Her elder sister, separated from her husband, joined a communist party and married a communist leader.

Segal’s determination, zest for life and independence also played a role in shaping her life and career choice. From her early days in Germany learning to dance, she writes that she was adamant about having the freedom to live on her own; for every holiday, she recalls, she arranged a trip to a new country. At that time, a husband was the last thing on her mind. Nonetheless, after turning down several offers of marriage, believing that it would hinder her career, she did finally marry Kameshwar, a young scientist, painter and dancer in Almora. Although her father was upset that Kameshwar was a Hindu, he did not oppose their union. In fact, Segal writes, Kameshwar stated his willingness to convert, but neither she nor her father wanted him to do so. Their marriage took place in Allahabad, a city associated with a strong nationalist movement, where the marriage of a Hindu and Muslim would not have faced public opposition.

Close-up gives a vivid account of the high points of Segal’s career. However, one gets to know very little about her negotiations between personal and professional life. When from an earlier autobiographical work, co-written with Joan L Erdman, we already know how her touring away from home would disturb her husband, setting up a long-lasting tension. But for Segal, her career always came first; she writes that she gave as much as she could to her children, and had them accompany her whenever she could. Eventually, one of Segal’s great personal tragedies was her husband’s suicide, in 1959, leaving her to raise their two young children. She writes that Kameshwar’s life would have ended differently had he not married her, and describes him as a high-strung, sensitive man who could never reconcile with the fact that his wife was steadily earning such success and prestige, whereas his rewards came sporadically. Also, the fact that she had a past that did not include him seemed to rankle Kameshwar.

Thus, Segal’s memoir is also a narrative of a single woman juggling her career and raising her children. After her husband’s death, she went to London to learn acting, where she struggled to support herself and her children. She did many odd jobs in London, and her life subsequently alternated between one of privilege and hardship. In this way, writings such as Close-up offer important windows into the varied experiences and struggles of women, especially in decades past, who chose what were then considered out-of-the-ordinary careers in the performing arts. Moreover, the women who came to performances from the most unprivileged sections of society faced exploitations based on caste and class, as highlighted in the autobiography of the famed Bengali actress, Nati Binodini, whose life was full of pain and betrayal. Thus, emphasising the voices and experiences of women performers from multiple social backgrounds and different social locales adds significant dimensions to feminist historiography.