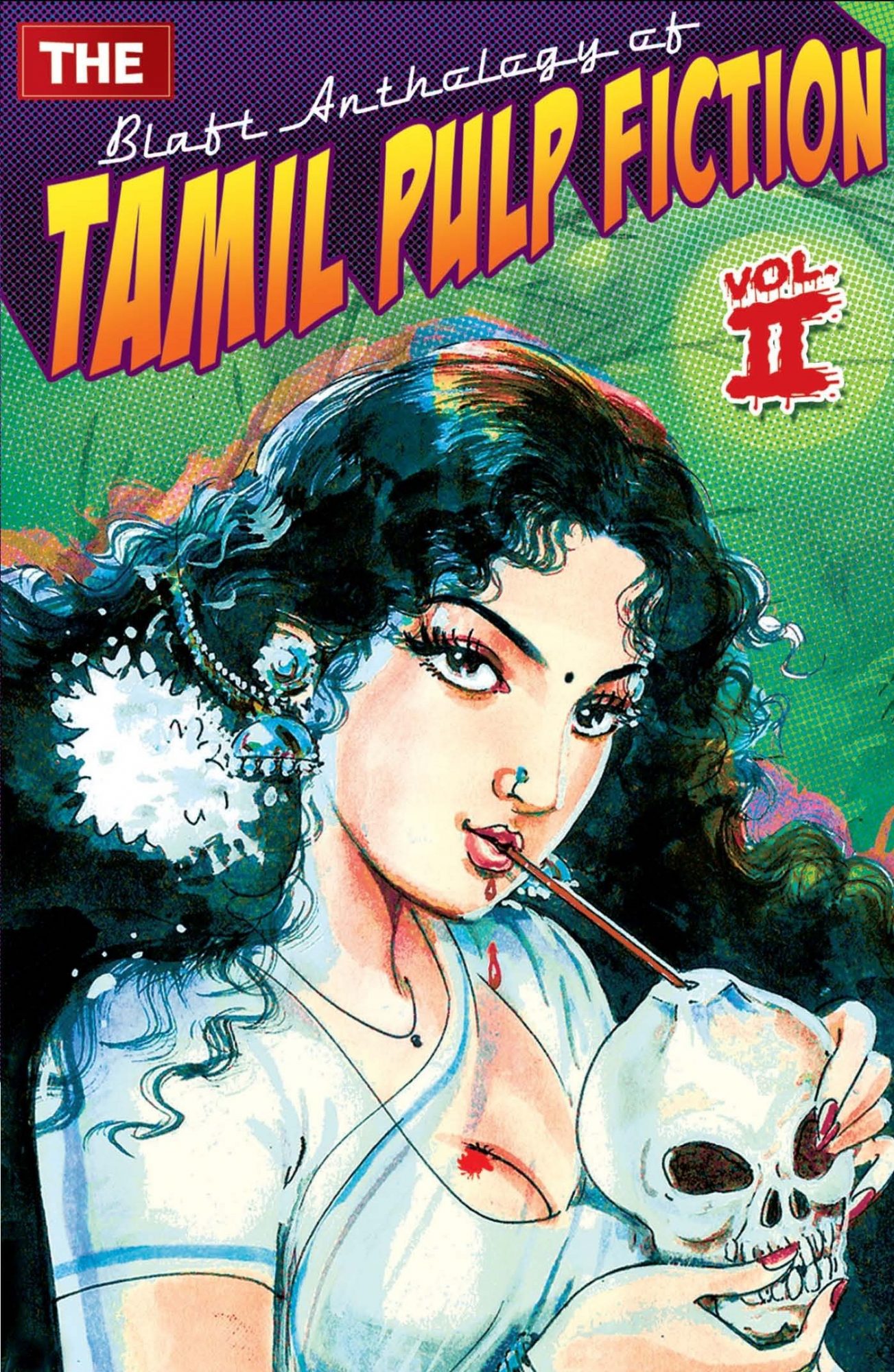 The Blaft Anthology of Tamil Pulp

In her Translator’s Note for Volume I of this series, Pritham K Chakravarthy wrote that the work, which was also the first publication by the Chennai-based Blaft, was ‘an attempt to claim the status of “literature” for a huge body of writing that has rarely ever made it into an academic library.’ These works of popular fiction, she explained, were typically not considered ‘serious’ or ‘meaningful’ enough to be translated. Her colleague and co-founder of Blaft, Rakesh Khanna, who started the publishing house in 2007, adds that the idea behind Blaft was to ‘capture different voices’. For instance, Charu Nivedita, a Tamil writer who wrote overtly sexual prose, was one among many writers whom Blaft began to translate and publish.

Blaft’s first project focused on translating works of popular fiction from the Tamil. For decades, these pulp novels have been sold in tea stalls and railway bookshops, and have been enjoyed by both men and women. In her translator’s note, Chakravarthy also writes about the culture of reading Tamil pulp in mid-1960s Madras, where in her household, ‘all the women at home’ read and shared popular magazines such as Anandha Vikatan, Kumudham, Dhinamani Kadhir, Tughlaq and others. As a child, she used to sneak copies given to her by her school driver. She writes that people would collect these stories and ‘would have them hard-bound to serve as reading material during the long, hot summer vacations’.

Since its publication, The Blaft Anthology of Tamil Pulp Fiction, Volume I has sold 8000 copies in India and abroad. While this is not big, the book allowed Blaft to create a niche for itself as an edgy, avant-garde publishing house. Volume II, which has sold 3000 copies since it came out in October, is currently set for a new print run, and there are already talks of publishing a third instalment.

For both the volumes, of course, the most significant question the publishers faced was who exactly to include from the plethora of Tamil pulp writers. For instance, Khanna points out that two writers, Rajesh Kumar and Indra Soundar Rajan, both of whom have written short stories as well as novels, were ‘everywhere’, so they had to include them. However, Khanna says, ‘Rajesh has written over a thousand books, so we couldn’t read each of these to figure out which to include.’ So, they decided that Chakravarthy would visit lending libraries, ubiquitous in Chennai, and find out which were the ‘most borrowed books’. Once she had a list of what seemed to be the most popular stories, she went back to the authors to see which ‘they thought was best’.

This was the process they undertook for both volumes, though with the second the focus was more on horror, a genre that was left out of the first volume. Translation followed the selection process and, here again, the question was how to give the translated text a specific ‘Tamil flavour’ while making it accessible to both Indian and international, especially American, readers. ‘The idea was to neither over- nor under-translate,’ says Khanna. The translations would therefore have to be ‘equally comfortable for Indian and American readers’. The American readership was taken into consideration because Blaft sells books through a US-based company. This market has been slow to pick up, although things are now looking optimistic, says Khanna, adding that they may now also venture into publishing e-books.

So, for instance, the story ‘Rebirth of Jeeva’ by Indra Soundar Rajan included the word dwajasthambam. The initial translation read, ‘Uma walked purposefully towards the dwajasthambam,’ which the Blaft editors later changed to, ‘Uma walked purposefully towards the dwajasthambam, the column connecting heaven, earth, and the netherworld.’ At the same time, for instance, roti remains untranslated, as are other words for food or clothing. One editorial discussion revolved around the common exclamation, aiyaiyyo. The question was whether to translate this as ‘Oh no!’ or ‘Oh my god!’, but in the end the editors decided against translation and instead included an explanation in the glossary that reads: ‘Expression of surprise or lament; “Oh dear!”’

The cover art chosen for these two volumes also aimed to strike a balance, being loud (as in, it should scream ‘pulp!’) but not to the extent of being gaudy. Being Blaft’s first publication, Volume I ‘had to catch attention’, says Malavika P C, who illustrated the cover images along with a collaborator, Shyam. She says they took inspiration from the character of Vaijainthi, the heroine who features in the story ‘Hurricane Vaij’ in the first volume. Vaij ‘is sort of generic in one way,’ Malavika says, ‘the buxom vital statistics, curved eyelashes and very powerful languid eyes.’ Vaij appears in pulp novels as well as other ‘more domestic’ Tamil publications. In these magazines and dailies, ‘you will see the same super-sexy woman holding babies, feeding an ailing mothers-in-law.’

Malavika says this is where the similarity ends, because ‘in pulp, most women couldn’t give a rat’s ass. They live. And they live on their own terms. They have space to do the crazy, the immoral and the extremely adventurous.’ While the first volume had a Vaij-like prototype holding a gun, wearing a translucent pink sari and spectacles, for the second volume the Blaft team selected the image of a ‘ghost woman’, also playing on the new volume’s focus on horror as a genre.

In the middle of a murder

Importantly, some of the content here specifically steps back to look at the pulp genre from a bit more of a distance. For instance, Volume II includes an eight-page collection of cover art taken from various 1960s to 1970s Tamil horror novels, such as Kiss of Blood, The Haunting Newface, Jasmine Mohini and A Siren’s Head on a Laughing Statue (in their English translations).

Along similarly semi-academic lines, in its second volume Blaft has also included short biographical notes about the contributing writers. So for instance, we find out that Indumathi, author of ‘Hold on a Minute, I’m in the Middle of a Murder’, published in 1979, was inspired by Hollywood horror blockbusters The Exorcist and The Omen, both of which ‘enjoyed long runs in house-full movie theatres all over Chennai’. The last line of the bio reads: ‘Be warned. This one gets a little bloody.’ In another short story, Medhavi’s ‘The Hidden Hoard in the Cryptic Chamber’, the editors encourage the readers to read the story if for nothing else then a walk down memory lane of 1950s ‘downtown’ Chennai. Rajesh Kumar’s biography, which appears before his story ‘Hello, Dead Morning’, tells the reader that he has been trying to win the Guinness World Record for the ‘most published author’, hoping to defeat the current title holder, L Ron Hubbard.

Thus far, the media in India has lapped up the two volumes. One reviewer has thanked Blaft for doing to Tamil pulp what in earlier decades was done in the Anglophone West to the works of such writers as Raymond Chandler and James Hadley Chase, who likewise started out as pulp writers but were elevated to litterateurs thanks to positive critical reception and distribution.

Blaft has certainly done a careful job of translation, in order to bring such ‘mass’ fare to the attention of the English-reading public. But ultimately it is the content that matters – and that, regardless of all the packaging, remains pulp. This is apparent from the way the stories were selected, with popularity among readers being the initial criteria. In fact, all these extras while adding to the pulp aspect of the novel, in a way almost interpret the text for the reader which, at times, becomes a little too interventional. As such, in the eyes of this reviewer, this work remains specifically non-literary, to the extent that it does not attempt to do anything but entertain. But then this is perhaps Blaft’s purpose – not to subvert but celebrate pulp in all its colourful gaudiness, making these works into an interesting genre: pulp that is very aware of being just that.