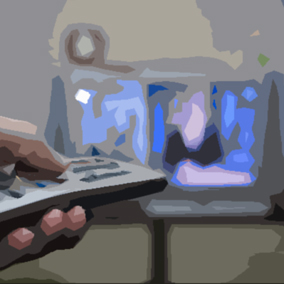 The day Osama bin Laden was killed my mother ate spinach soup with a fork. In Hungary, where I come from, we often prepare vegetables at home in a stew with soupy consistency, which is eaten with a spoon. That day, I was late for lunch to my mother’s. There is always so much to do when we visit her in Budapest that meal times are the least of my considerations. As I ran towards the metro, I felt hassled. I collapsed on a seat and tried to catch my breath. The people sitting next to me were having a heated discussion on some recent event, but I did not pay them attention. There was too much noise. I was irritated with myself because I knew my mother would not start eating without me. I hurriedly walked from the station promising myself, as always, never to be late again.

When I entered the flat, still panting, my mother was sitting at the table in the dining room, quietly eating spinach soup with a fork. No reproaches, no questions, she looked at me calmly and continued eating. In the living room, the TV was blaring.

We try to let in the world’s news in small, manageable quantities.

I stared at my mother, unable to move, as if torn between her strange quietness and the agitated voice pouring out of the television.

“Here is a spoon. Wouldn’t it be easier?”  I asked my mother cautiously.

I went to the living room. A radio or the TV is always on at my mother’s place since she likes to be up-to-date with the news of the world. The TV screen showed old images of bin Laden and grainy video footage of a house and a helicopter on fire. All feverish, the commentator spoke about a commando operation that took place in the city of Abbottabad in the middle of the night. Bin Laden was dead. My teenage son sat in front of the screen and stared at those grainy pictures.

I went back to my mother.

“Did you hear that Osama was killed?” I asked her. She sat at the table, forking her spinach soup quietly and staring at the pattern of the table cloth.

“I know,” she said in an indifferent tone.

Something was wrong. My mother usually flips out at the most banal road accident that claims a life. All of a sudden, I felt heavy. I cleared my throat, but did not dare to ask anything. Back in the living room, I told my son,“Come on. Sit down to eat with us.”

“I am not hungry,” he said, without taking his eyes off the screen.

I couldn’t resist either. Standing in the middle of the room, I was glued to the hazy images, trying to figure out what had happened. The reporter’s voice was oscillating between battlefield tension and triumphant trumpeting.

“I disagree,” said my son suddenly. “They should have taken him to court.”

I nodded without a word. We taught our children that human life was sacred and the roads to justice were straight. For a few weeks following the incident, we had several long conversations about what happened, but failed to find an explanation we all could feel comfortable with. The moment I started to say something on the lines of ‘war logic’ or ‘certain circumstances’, I found myself on slippery terrain. In addition, a foggy feeling of guilt intermingled with my unease. It’s hard to avoid feeling like an accomplice if something happens in your name, even if you disagree with it.

By the time I joined my mother for lunch, the spinach soup had vanished from her plate. I heated up the rest of the meal and sat down with her. We ate in silence.

Later, when more images of that night in Abbottabad were released, we could discern the contours of a building, its long corridor, sealed doors that were burst open, some furniture and heaps of other things we could not identify. Shadow-like people equipped with mysterious objects were moving around cautiously between pitch darkness and rapidly zigzagging light. The hands of the person who held the camera were unsteady.

I recalled much later that I had seen similar grainy-shaky pictures that rewrote history once before – the day Neil Armstrong set foot on the moon. It was hard to figure out what we were actually seeing on the TV screen back then as well, but this did not diminish the awe taking us over. There was, of course, Yuri Gagarin before, but no one saw him circulating around the globe. We heard him talking on radio as he spoke about the emotion that overpowered him when he first set eyes on our beautiful planet from space. I also remember a song about the gorgeous Moscow nights that was broadcast about the same time. In my little girl’s imagination, it all belonged together: balmy, romantic nights, the splendour of our world and a human voice talking to us from inconceivable distance. I listened to the crackly sounds and imagined how magnificent the view must have been and how lonely Gagarin must have felt there. But when Armstrong stepped on the powdery surface of the moon, he was accompanied by millions of witnesses, holding their breath. I remembered the slightly inebriating feeling that seized me as we were watching him. As if the dimensions of our existence had suddenly extended. Years later, I heard rumours that the whole thing was filmed in a studio, but I could not care less; those blurred images of that miraculous event were a moment of shared grace for mankind.

I also remembered the day in 2001 that led to the grey images filmed years later in Abbottabad. I was living in Geneva with my children and American husband. It was early evening; my husband had gone to buy cigarettes and he came back running.

“There is an attack on America!” he shouted. He came across the news at the tobacconist’s. Unlike my mother, we rarely have the TV on in our flat. We try to let in the world’s news in small, manageable quantities.

I turned the TV on and watched the images mesmerised. We live in the middle of Europe, in peaceful Geneva, but I had the feeling that the walls around me were leaning in.

Next day, my son came back from primary school all upset.

“Poor Mohsin,” he said. “He keeps repeating he didn’t do it. He was crying all day. I had to sit with him until his mother came to fetch him.”

Some days later, as soon as I picked her up after preschool, my daughter, full of indignation, sprang a question on me:

“What happened in America? Why didn’t you tell me anything?”

I didn’t want to give a long speech on why we try to feed them the news of the world in little portions. She will understand it soon enough, I thought. In any case, we failed, yet again. All the newspapers displayed the disturbingly aesthetic images of destruction.

I waited for her to finish her afternoon snack and then we sat down on her bed and I began to explain. It was not easy. How do you explain to a five-year-old that some people killed themselves in order to kill many others?

It took a couple of days to get through to my stepson, who was studying in New York at that time. Still in a state of shock, he talked about the giant black columns of smoke that he had seen from his flat miles away from the centre, of the images of people jumping from the windows, the enormous pile of ruins that was left in the middle of Manhattan.

“The world will never be as it was again,” I heard myself say.

I am talking like my grandmother, I thought, though none of my grandmothers would have ever uttered similar words. They were too busy to avert the blows their respective destinies repeatedly dealt on them. One had to survive misery, the other persecution. And, when was the world like before, anyway?

What a lucky generation ours is, I thought all of a sudden as I put down the receiver. Our grandmothers grew up struggling for survival; our children grow up with images of horror. Lucky we, we saw the breakthrough of civil-rights movement, the end of the Vietnam War, the fall of the Berlin wall. We could still hope that unjust wars could be stopped, mass movements could have results, that despite regular setbacks, the world was heading towards liberty, equality and brotherhood. Generations and generations of our ancestors saw the moon as an unattainable object of mystery. We saw one of us set foot on it.

Later, we learnt that my mother suffered a minor stroke the day Osama bin Laden was killed, which explained her indifference to news and a temporary confusion with forks and spoons. Fortunately, she recovered completely.

I wish our world did as well.

~Yudit Kiss is an independent economic researcher and author based in Geneva.she has been published in the Guardian, Lettre International, El Nacional, and Nexos, among others.