Skip to content
Himal Briefs > The second wave of migration 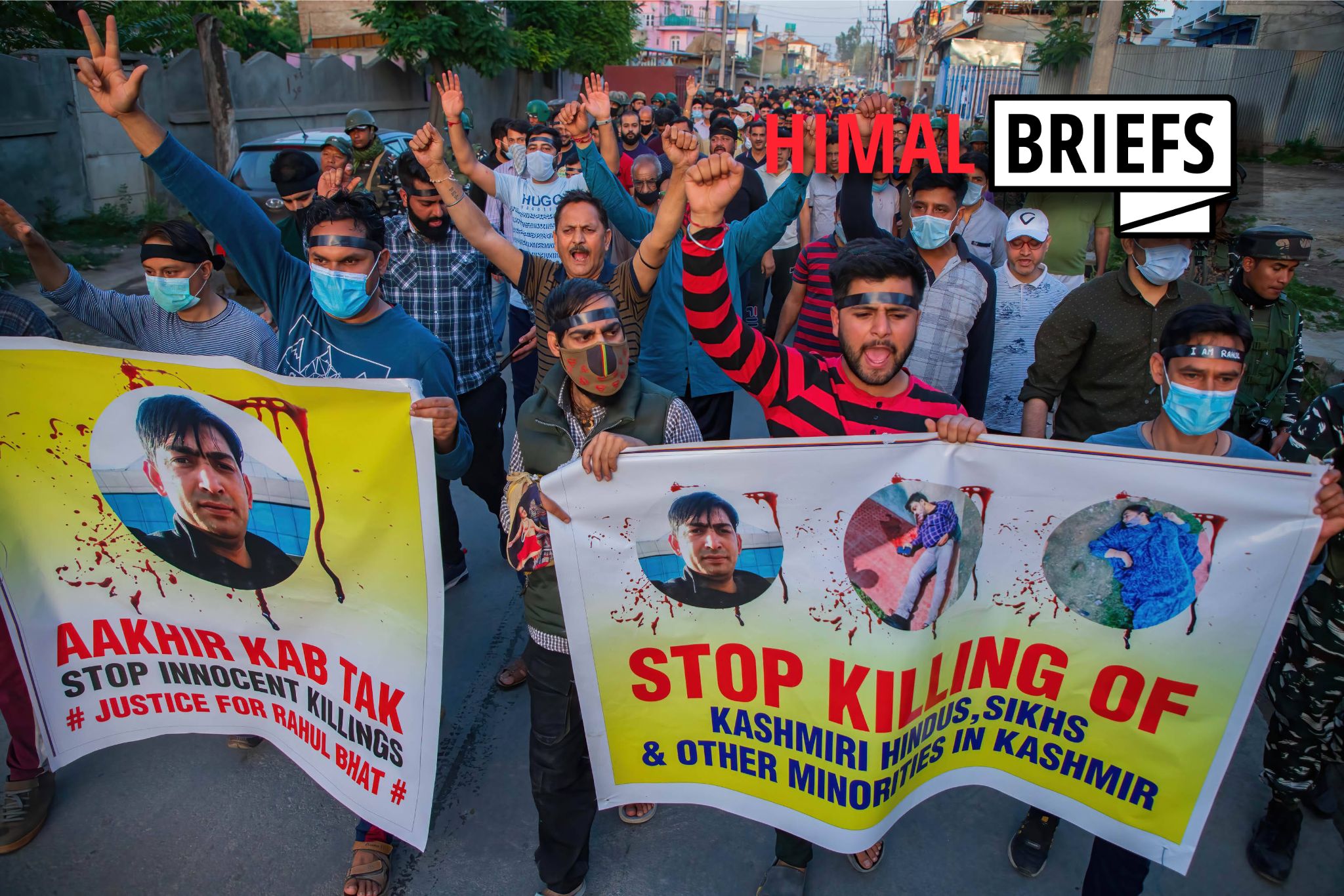 Kashmiri Pandits protest after the killing of Rahul Bhat in Budgam district of Jammu and Kashmir. May 2022. Photo: IMAGO / ZUMA Wire.

The issue of Kashmiri Pandits has been a recurring and prominent theme in India’s national politics. In our last column for Himal Briefs, we discussed how the film The Kashmir Files negatively presented Kashmiri Muslims, which led to Islamophobia and attacks across the country. The Hindu right-wing government and its ideological mentor – the Rashtriya Swayamsevak Sangh (RSS), promoted the film. The RSS chief Mohan Bhagwat’s statement referred to Pandits as “devout Indians”, positioning them as a pro-Indian and nationalistic subset of the Kashmiri population, who will work for India’s interests in the region. This has made the minority prone to attacks. In April, the statement was made to a group of Kashmiri Pandits wherein Bhagwat also heaped praise on Israel and Jews who struggled for their “homeland” and succeeded. Such a statement, when the fear of demographic change has engulfed the entire region, is bound to have serious consequences.

Around 18 Kashmiri Pandits and migrant Hindus have been killed as of June 2022 since the abrogation of Article 370 in 2019, which granted exclusive property and employment rights to the native population. In the last few months, particularly in May (a month after RSS chief’s statement), there has been a spike in civilian killings in Kashmir. Rahul Bhat, a Kashmiri Pandit who worked in the revenue department in central Kashmir, was shot dead in his office on 12 May. On 31 May, Rajni Bala was killed after being attacked outside a government school in south Kashmir where she worked as a teacher. Several migrant labourers from India were targeted in deadly attacks since the change in Kashmir’s special status. Militant groups like Lashkar-e-Taiba and The Resistance Front have released statements justifying these attacks as retaliation against attempts to settle outsiders and change the demographics of the region. Many security experts have pointed to the changing nature of militancy in Kashmir – the recent attacks were well-planned, and their targets were strategic.

Attacks on Kashmiri Pandits and migrant Hindus seem to have been executed to deter outsiders from settling in Kashmir and exploit local fears of demographic change. Rahul Bhat’s department is responsible for handing out domicile certificates and resolving property disputes. The department’s work is directly related to property rights and could have been seen as encouraging demographic change in Kashmir. AS Dulat, the former chief of the Research and Analysis Wing (RAW), the foreign intelligence agency of India, pointed out that militants knew the exact location of Bhat’s office, and his presence there at the time of the attack, demonstrating that they have a strong intelligence network and possibly have members within the department itself. He further agreed that militants had infiltrated the security system and had access to information about Kashmiri Pandits working across Kashmir, especially in departments which are tied to recording demographic change.

Attacks on Kashmiri Pandits and migrant Hindus seem to have been executed to deter outsiders from settling in Kashmir and exploit local fears of demographic change.

The brutality and meticulousness of the attacks have made Kashmiri Pandits fearful and they have now started to leave Kashmir, in what is being seen as the second wave of Pandit migration. Many of those who left Kashmir recently had returned as a part of a rehabilitation scheme under which the government provided jobs and accommodation to the members of the community. Reports suggest that hundreds of Kashmiri Pandits have already fled Kashmir, while others are protesting and demanding to be transferred elsewhere. Pandit leaders like Sanjay Kaul, a leader of the All Minority Employees Association Kashmir, have been demanding that they be transferred to Jammu or other parts of the country for their safety. The Bharatiya Janata Party-led Indian government, which claimed to have wiped out the militancy from most of the areas and paved the way for permanent resettlement of Pandits, has resisted these demands. The protests by Kashmiri Pandits, where Muslims also joined, were met with batons and teargas. Two former chief ministers of the erstwhile state also tweeted in support of the protesters.

The RSS chief who had promised protection to Kashmiri Pandits and projected them as devout Indians settling in Kashmir forever, did not make a statement about the recent attacks or the subsequent protests by the Pandit community. A majority of BJP leaders who had praised The Kashmir Files for showing the truth about the atrocities against Pandits have also maintained a convenient silence so far. Despite the threat of violence and consequent demands by the community to relocate them, the BJP remains adamant about preventing a political disaster and maintaining a veneer of normalcy.

The brutality and meticulousness of the attacks have made Kashmiri Pandits fearful and they have now started to leave Kashmir, in what is being seen as the second wave of Pandit migration.

On 20 July, Union Minister of State for Home Nityanand Rai said that no Kashmiri Pandit had left the Kashmir valley since August 2019. However, various reports suggest that hundreds of Hindu families have already fled the valley. On 2 June, the Kashmiri Pandit Sangharsh Samiti (KPSS) demanded security for migrating families until they leave the boundaries of the valley. The denial of mass migration by the BJP-led government reflects their blatant disregard for the besieged community’s safety in order to project a hunky-dory picture of the conflicted region.

The Indian right wing’s exploitation of Kashmiri Pandits through the recently released film and the subsequent anti-Muslim rhetoric has aggravated the suffering of the community. At the same time, the government is refusing to accept their demands of relocation and, in some instances, has locked them inside their gated colonies to prevent them from leaving Kashmir. The issue of Kashmiri Pandits has reaped huge election dividends for the incumbent BJP which claims to work for the interests of Hindus. However, the weaponisation of the issue against local Muslims has hurt the prospects for peaceful resettlement and has reversed the strides made over the last decade. The explicit references to Israel and its model of resettlement have worsened distrust among the local majority.

Other updates from Kashmir

On August 16, a Kashmiri pandit, Sunil Kumar, was shot dead by militants, while his brother, Pintu Kumar, was gravely injured.

Kashmiri journalist and editor of the news portal The Kashmir Walla, Fahad Shah continues to be under detention since 4 February for an article he published. The Special Investigation Agency accused him and the author of the article, Abdul Aala Fazili, of propagating “secessionist” and “terrorist” narratives to “disintegrate” the unity of India.

A majority of BJP leaders who had praised The Kashmir Files for showing the truth about the atrocities against Pandits have also maintained a convenient silence so far.

Pulitzer-Winning Kashmiri Photojournalist Sanna Irshad Mattoo was stopped from travelling to Paris by immigration authorities despite holding a valid French visa. She was not given any reason for the embargo but was told that she will not be able to travel internationally.

Another Kashmiri journalist Akash Hassan was stopped in a similar way from travelling to Sri Lanka to report on the recent crisis. After being questioned about his background and purpose of travelling, Akash was not allowed to board his flight to Colombo. There seems to be an unannounced travel ban on Kashmiri journalists.

Maknoon Wani is a journalist and academic mentor and an incoming graduate student at Oxford Internet Institute, University of Oxford. Maknoon has extensively covered the Kashmir conflict, internet shutdowns, and anti-minority hate speech in India. His interest also lies in technology policy and internet governance.