Skip to content
Analysis > Beauty and contradiction in Tibetan art

Beauty and contradiction in Tibetan art

What is Tibetan about art that bears no obvious reference to ‘Tibetan-ness’? Plenty. 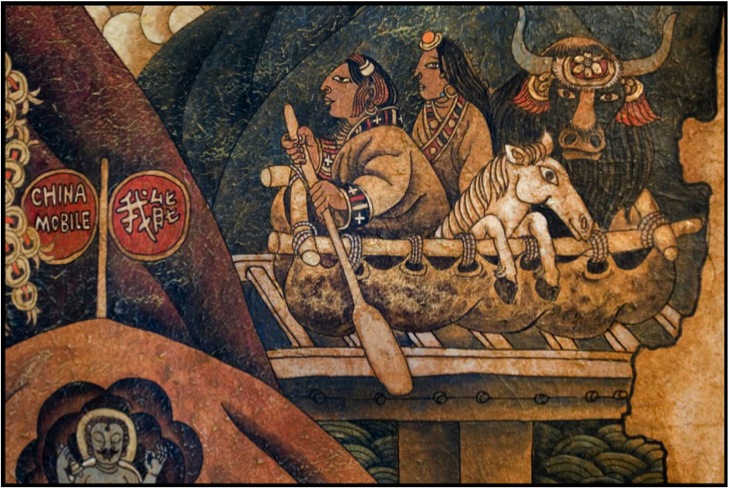 I first met the Tibetan artist Gadé (transliterated as dga’ bde) on a cold November day in 1994. After showing me around the Fine Arts Department of Tibet University, where he was working as a lecturer, we looked at some of his own art works. His paintings were enthralling. Some depicted elegantly posed figures swathed in warm colours, while others were of delicate bodies framed within the silhouette of a resting Buddha. Gadé uses paints he makes from mixing different types of minerals, and his work therefore carried an earth-tone colour scheme, occasionally accentuated with bright hues. Buddhist symbols imbued his works with a sense of serene beauty and mystery.

A few hours later, over lunch at a newly opened Indian restaurant on Beijing East Road, Gadé said that a Chinese postage stamp was being released that featured one of his paintings, a rare opportunity for a Tibetan artist living in Tibet. The restaurant at which we were eating was owned by two businessmen, one Tibetan and one Nepali – it is one of the joint-ventures that has boosted the economy and the mood of Lhasa residents following the years of particularly repressive control. The novelty of being able to eat spiced curries while watching Tibetan girls wrapped in colourful saris dance to Indian music had made the restaurant, for a short while, the talk of the town. In a way, the restaurant represented Lhasa and Gadé – hybrids made of a mixture of Tibetan, Southasian, Chinese and Western influences.

Over the past 12 years, Gadé has remained consistent with his technique of grinding stones into paint – as if he were trying literally to ground his works in his native soil. His focus during this period, however, has shifted. In his early works, Gadé’s figures were mainly inspired by Buddhism, which he says led him to depict a mythical Tibet that only existed in his imagination. “What I really wanted was to paint my Tibet, the one I grew up in and belong to,” he says.

Gadé’s current works include significant depictions of present-day Tibet – a monk comfortably sitting next to a People’s Liberation Army soldier; miniature portraits of Elvis Presley, Sherlock Holmes and Mickey Mouse painted on a faint lineation of a Buddha. The juxtaposition of the local with the global is not just Gadé’s own preoccupation; in this he represents a new generation of Tibetans who are at home in both the traditional and the modern Tibet. “My generation has grown up with thangka painting, martial arts, Hollywood movies, Mickey Mouse, Charlie Chaplin, rock-and-roll and McDonald’s,” he has written. (For more on representations of Tibet, see “More mythology”, page 74-75.)

Indeed, Gadé and his generation grew up during a time of political and socio-economic reforms. They have not experienced, but only heard of from their parents, the disastrous political campaigns that China and Tibet were forced to undergo. Many of them also belong to a group of privileged Tibetans who were sent to mainland China for their education. Gadé, for example, was trained in both Western and Chinese styles of painting at the Central Academy of Fine Arts in Beijing. The Lhasa this new group knows has evolved from an ancient city into a modern metropolis, where the past and the present coexist – sometimes uncomfortably, but sometimes quite comfortably. Early each morning, young and old Tibetans alike reverently queue up to get into the Jokhang, Tibet’s most sacred temple; their evenings are often spent in glittering karaoke bars and fancy nightclubs. Artists such as Gadé – as well as many of his peers, such as Dedron, Tsewang Tashi, Nortse, Tsering Nyandak, Tsering Dhondup and Zhungde – are constantly switching between these two worlds, of traditional and contemporary Tibet. Some do not even feel obliged to express any noticeably ‘Tibetan’ reference in their works; although physically based in Lhasa, their art includes cultural references from all over the world. The result is innovative, and shows a creativity and vitality not seen in the traditional Tibetan art forms. Undoubtedly, these works mirror the present state of Tibet – a place full of beauty and contradictions.

Too much has happened

The history of contemporary Tibetan art starts with the controversial scholar, monk and traveller Gendun Chopel, who lived during the early part of the 20th century. Chopel’s paintings and sketches, especially those he produced while travelling through India during the 1930s and 1940s, provide windows onto his innovative and inquiring mind (See Himal October 2006, “The new reasoning of Gendun Chopel”). Chopel’s student and friend, Amdo Jampa, who died in 2002, became the first Tibetan to study art in China. Jampa’s works, such as the murals he painted during the early 1950s inside the Norbulingka, the Dalai Lama’s traditional summer residence, were pioneering in the sense that they combined traditional Tibetan styles of painting with photo-realist portraits.

The styles now used by the new generation of Tibetan artists are significantly more diverse, ranging from traditional paintings to realist, abstract or expressionist pieces. In creating such works, these artists, as with their forerunners, are pushing the boundaries of what is known as ‘Tibetan’ art.

Many worry that such interfusion could destroy what little of traditional Tibetan culture is left standing. But to locate authenticity only with those who produce traditional art is to deny the existence, history and experience of those like Gadé. Gadé vehemently opposes being forced into a defined category: “Now”, he writes, “we cannot place our identity in a fixed area, as there are too many things that have happened.” This comment, which he made regarding a painting he had created depicting the arrival of the first train to Tibet in July 2006 (see image opposite), is a strident reminder to those considering how to define a ‘Tibetan’ or ‘Tibet’. The issue of authenticity does not torment the artists themselves, it seems, but more so those who want to confine Tibetans into certain constructed and constricted identities.

How else can we explain the silence with regard to the works of, for example, Kalsang Lamdark, a Tibetan artist born in India, raised in Switzerland and trained in the United States? Lamdark is one of the few Tibetan artists who expresses himself through multimedia installations. His works are articulations of his many understandings of what it is to be a Tibetan, a Swiss and an artist; the multiple layers of his identity are at the centre of his artistic vision. Nobody seems to be interested in discussing Lamdark’s work in the context of contemporary Tibetan art, however. In this case, is authenticity vested only located in those who live within Tibet, or is Lamdark culturally too close and therefore of no interest?

Whether their works are produced inside or outside of Tibet, these artists are breaking away from what is commonly known and presented as Tibetan art. Their work, however, reflects an important aspect of contemporary Tibetan culture, and merits careful consideration. They represent, after all, the present state of Tibet and its people.

Yangdon Dhondup is a research associate at the Department of the Languages and Cultures of China and Inner Asia, SOAS University of London.