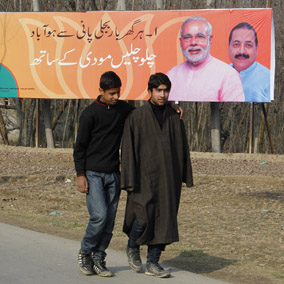 The political deadlock following State Assembly elections held in Jammu & Kashmir last December has finally been broken. On 25 February, the People’s Democratic Party (PDP) and the Bharatiya Janata Party (BJP) announced the formation of an alliance, and a coalition government was sworn in on 1 March. The state had earlier been placed under governor’s rule as no party was able to win a majority of the vote and attempts to form a coalition government proved difficult.

Though fractured mandates and coalition governments are a staple feature of J&K politics, the results of December’s election provided a vexing set of strategic considerations for the two parties that gained the largest vote shares. The PDP and BJP hold oppositional values, and derive their mandates from separate regions of the state

Rather than ethical considerations or the arcane matters of coalition politics, voting in Kashmir is driven by survival imperatives and the distribution of state patronage.

The PDP, which won 28 out of a total 87 seats in the Assembly, was understandably reticent to partner with the BJP. The PDP’s campaign focused on keeping the BJP and its ‘Mission 44+’ from making inroads in the Valley, and highlighted the BJP’s position on Article 370 and its barely-concealed antipathy towards religious minorities. The BJP won 25 seats, all of which came from the Jammu region. A PDP-BJP alliance is, in many ways, contradictory, and compromises each party’s ideological moorings, despite the mutual attractiveness of stable government and a profuse flow of resources.

For the PDP, an alliance with the Congress or National Conference (NC) was no more enticing. A PDP-Congress combine had the potential to alienate voters throughout Jammu, where neither party derives significant support, while leaving an opening for a hawkish BJP opposition buttressed by the Centre. The NC, meanwhile, is the PDP’s arch rival, making a coalition between the parties unlikely, unless both are confronted with an immediate existential threat.

Within the reasoning of PDP leaders, coalition formation was dependent on the perceived durability of an alliance and whether it would undermine the party’s support base. After more than a month of deliberation, the PDP remained beset with a basic question: to ally or not to ally? The straight-faced consideration that was given to this ‘dilemma’ is difficult to comprehend. That PDP founder and now Chief Minister Mufti Mohammad Sayeed decided to go ahead with forming a PDP-BJP coalition is unlikely to have significant consequences for the credibility of his party among Kashmiri voters. In Kashmir, political alignments at the elite level do not necessarily affect or dictate political choices at the local level.

A basic truth
Rather than ethical considerations or the arcane matters of coalition politics, voting in Kashmir is driven by survival imperatives and the distribution of state patronage, the co-option of local elites, and the selective use of threats and inducements. Working with the BJP is nothing new in Kashmir – the NC did it unscrupulously earlier, albeit at the national level. Moreover, the NC did so without re-appraising its position after the barbarity of pogroms in Gujarat and the complicity of the BJP in unleashing the mayhem. That the PDP will work with the BJP on ‘pragmatic grounds’ (as they will no doubt justify it), will not earn them the public’s contempt. While an alliance between similarly opposed parties in any other context would be considered unethical and immoral, in Kashmir the realities are altogether different. The PDP need not worry itself.

Within Kashmir, the moral and ethical standards of pro-India parties are, from the outset, held in low regard by much of the polity. The parties are often perceived as willing collaborators that provide a democratic sheen to an ongoing occupation. Senior Kashmiri politicians, including previous NC Chief Minister Omar Abdullah, and before him Mufti Mohammad Sayeed, have explained away custodial killings and cold-blooded murders as aberrations in a wider campaign to provide national security and law and order. When pro-India forces rationalise the murder of young Kashmiris with the obnoxious logic of territorial integrity and self-defence; when they incarcerate hundreds using colonial laws; and when they see Armed Forces Special Powers Act and militarisation in general as instruments to serve the collective public good, moral rectitude is difficult to sell.

For the PDP, the consequences of an alliance with the BJP will never be more than a superficial reproach from those attempting to instrumentalise popular aversion of the BJP to discredit the coalition. Indeed, there is nothing sacrosanct about electoral politics or alliance formation in Kashmir. These processes are altogether murkier, and are propped up and mediated by the presence of ‘deep state’ forces. The 2013 revelations of former Indian Army Chief V K Singh that the army had been financing various politicians in the pursuit of its interests is demonstrative. Within this context, there is nothing non-ethical about an electoral partnership when the whole structure on which it stands is fundamentally amoral.

Rather than embodying effective democratic governance, elections in Kashmir are exercises conducted at regular intervals with or without human participation. When people participate, it is framed by media as a celebration of Indian democracy. When they don’t participate, as in the 1990s, it matters little to policymakers and the broader Indian public: Kashmir is, after all, still democratic. Within official reasoning, people’s participation remains subservient to the larger strategic interest that elections serve. Those who find this analysis problematic often counter-pose another question: if elections are instruments for concealing and legitimising an occupation, why do people validate such processes by their participation?

The answer to this question is simple: Kashmiris did not vote in the 1990s, and nothing changed. India did not move its troops back or renounce its claim over Kashmir. In 2008, they voted in fairly large numbers, but even then, large nationalist uprisings ensued. In effect, voter participation in Kashmir has little correlation to the nationalist sentiments of the electorate. ‘High’ participation does not imply a collective volte-face or reconciliation with the status quo. Rather, it reflects a yearning for better administrative and social services, and in the present instance, an active opposition to the BJP and the existential threat that many perceived its victory posed. Given this set of overarching truths, if the BJP softens its stance on issues such as Article 370, the alliance will be of almost no import to the future credibility of the PDP.

With the declaration of the PDP and BJP’s partnership, the realities of Kashmiri politics remain unchanged. The demands of realpolitik mean parties need not burden themselves with the moral qualms of an electorate that long ago saw through the official ruse.