Living in the realm between social reality and scripted stage, the mobile theatre community in Assam not only entertains, but also reflects the absurdity of life. 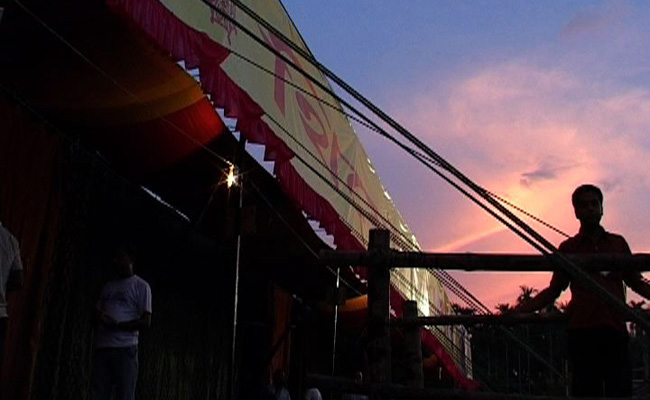 The onslaught of television channels for the last two and a half decades seems to have redefined the very notion of leisure and entertainment in the average Indian household. Today most of the population is beholden to satellite television for their daily dose of amusement. However, the majority of the rural population in the state of Assam still remains engrossed in the art form of mobile theatre. Imagine people queuing up to buy theatre tickets at 5 am. It’s not an illusion or some utopian situation, but a reality across the state from mid-August to 13 April every year.

Assam, situated on India’s northeast frontier, is home to this unique form of entertainment. The touring theatre groups visit towns and villages, carrying their own stage equipment, generators and even auditoriums in trucks. They pitch their tents in open spaces and erect makeshift auditoriums with seating capacities between 2000 and 2500. For quick changes of scene, two stages are erected. After rehearsing for about two months, each theatre troupe travels across the state to 70 pre-determined locations and performs for 210 consecutive nights, staging plays for three to four days in each place. Come winter, spring or early rain, nothing deters the local folk, and every year theatre aficionados pack the tents in droves, making mobile theatre the biggest entertainment industry in the entire Northeast and leaving mainstream cinema far behind.

The mobile theatres’ source of income is completely restricted to ticket revenues, with prices ranging from INR 40 to 60 for gallery audiences and 100 to 200 for those in the front rows. Interestingly, mobile theatres donate 40 percent of their income to schools, colleges, village clubs, and other social and religious organisations, thus concurrently performing a social service. This arrangement is perhaps the only one of its kind in the world. Another unique feature of the mobile theatres is that the entire company – nearly 130 people, including the actors, directors, producers, technicians, cooks, helpers and even the drivers – travel and live together like a commune, performing their respective duties, coordinating their activities day in and day out for nine months and eventually sharing a common cultural space and identity. Self-reliance is the intrinsic rule of this art form.

Initially the mobile theatre repertoire was based purely on mythology and folklore. With the passage of time it has undergone an exceptional transformation, and today the uniqueness of mobile theatre dwells in the topicality and diversity of its themes. Mobile theatre embraces a range of contemporary material; this has included plays based on the royal palace massacre in Nepal, the attacks on the World Trade Center, the lives of Saddam Hussein, Benazir Bhutto and Lady Diana, and adaptations of James Cameron’s Titanic and other Hollywood successes like The Lost World, Godzilla, and My Best Friend’s Wedding. While tackling contemporary issues from around the world, over the last few years mobile theatre has received rave reviews in the international media, with dozens of foreign journalists and television crews trailing the travelling theatres through bad weather and muddy villages. In spite of the lack of state support or any other patronisation, mobile theatre has sustained itself as an alternative art form, coping with the changing times and adapting in order to stay relevant. Embracing modern technology to compete in a world of sleek media production, it has revamped and redefined global trends in a local context.

Forgotten heroes
Recently, this writer filmed a documentary entitledThe Nine Months about the tradition, style and aesthetics of this unique form of performing art, delving into the lives of the approximately 5000 people engaged in the 40-odd mobile theatres during their nine-month season. The journey started from Pathsala, a small town in south Assam and the traditional hub of mobile theatre, where the legendary Achyut Lahkar, the founder of mobile theatre, realised his dream in 1963. While today’s mobile theatre groups celebrate their resounding success, the man who gave the world this new performing art sits alone in a sombre mood at his dilapidated residence. The interior of his house is designed like a mobile theatre set, the walls swarming with trophies, mementos and certificates of appreciation, all bearing testimony to his long journey of artistic experimentation and accomplishment.  When we met, he was ecstatic about the grand success of the medium, though he did not hide his disappointment about the closure of his pioneering Nataraj Theatre group after 40 successful years. He is still unable to recover from a deep creative slumber, which is indeed a great loss to the history of mobile theatre.

One of Achyut Lahkar’s most significant contributions to performing art was to bring women to the stage. This opened new vistas for female artists, enabling them to fulfil their artistic passions and aspirations, and giving them the confidence to lead lives of independence and dignity on par with male artists. This is illustrated by Anupama Bhatacharya, who played the first female lead role in the Nataraj Theatre. She started her acting career in the Assamese film Siraj in 1948, and her family was socially ostracised since working in film meant that she was considered a fallen woman. But she defied societal sanctions and continued to act in the film. When Shiraj was a major hit she was acclaimed and established her career in acting. When Achyut Lahkar formed his mobile theatre group, he offered Bhatacharya a leading role with remuneration of INR 2000 for the entire nine months. It was a lucrative offer for any actor then, and as a single parent with family obligations to fulfil Bhatacharya could not refuse. Bhatacharya made history as a pioneer in her own right. She expressed her deep satisfaction at having been a path breaker for female actors in mobile theatre, as it was her decision that opened vistas for other female actors now making a career in mobile theatre and earning handsome salaries. Some of the actresses charge more than INR 30 lakhs for a theatre season. But Bhatacharya also laments that she now leads a solitary and retired life, and none of the theatre groups ever invite her to watch their plays even if the company’s stage is in the field right next to her home. She grieves, and expresses her enduring love for acting.

There is something perturbing about the treatment of veteran actors by the very theatre groups that they spent sleepless nights with for many years. When an actor leaves for any reason, no testimonies or epitaphs remain for them to be remembered by. Many are then forced to live lives as if they never enthralled the expectant thousands with their magical performances. Many veteran actors approached their jobs as a selfless service to the masses, yet they have been pushed into oblivion forever. Perhaps with time they learn to celebrate their work in their own imaginary worlds, surrounded by ovation and approval. 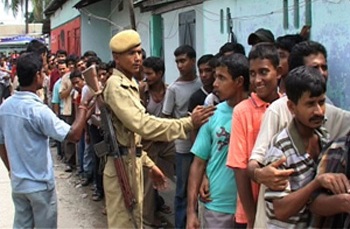 Beyond scripted lines
On a wintry morning in another small town, people were queuing up in the early hours to buy theatre tickets. Manalisa was still asleep in the house of someone she had met only yesterday, trying to repel the fatigue of three continuous performances the previous night and to muster the endurance to entertain those who had lost sleep to book their seats for her outstanding performance. Manalisa, a five-year old girl, was the star attraction in one of the season’s mobile theatres. Her social environment unlocked complex emotions: joy, fear, uncertainty, and apathy. Does she lose her innocent childhood when trying to ape and emulate the older artists, using the makeup brush on her own eyelids? Perhaps she does. At times she seems to be enjoying all the glamour and glitter. But is someone unfairly exploiting her situation? Regardless, for now Manalisa’s contract has been renewed for the next season, another nine months. Following Manalisa on the last show of the season, she joined in the howls and clamour of the other artists as they said goodbye. They all knew that after tomorrow they were not going to meet again; they were ending their nine-month contractual agreement, perhaps to join another theatre company next season or search for an alternative vocation. Manalisa’s journey began like that of other veteran artists, and gradually she must learn to negotiate life in the mobile theatre and survive the competition.

Mridul Bhuyan and his wife Aditi are both lead actors in mobile theatres and have been travelling and acting for more than a decade, perennially on the move. It has changed how they, as a family, perceive the notion of an ‘ideal home’ and connect with the social reality that exists beyond the stage and the scripted lines. How do they and others like them deal with a situation where serial bomb blasts kill and injure hundreds of people in the troubled and politically torn state of Assam? How do they deal with the socio-political turmoil reflected in ethnic and communal conflicts, with killings, arson, terrorism and other forms of unrelenting violence? Yet they have to traverse the entire turbulent state and connect to all audiences and entertain them equally.

Following some of these characters as they travel with their respective theatres, one begins to see mobile theatre as a mirror in which both audiences and actors can reinterpret the plays and reflect upon their real lives. The Nine Monthstries to unfold the nuanced lives of the thousands of mobile actors, their aspirations and moments of celebration together with the sense of meaninglessness and the dilemmas that arise from living between the social reality and the scripted stage.  There are actors who have been acting in mobile theatres for three decades, living an almost gypsy life. One of the actors, Dulumoni Deka, shared the story of the most tragic moment of his life. He could not perform the last rites for either his mother or his father because of his commitment with his producer, who likewise had a commitment with the audience. There was no substitute or provision for replacement. Dulumoni had no choice but to perform for the huge audience that had waited for so long to see their beloved actors on the stage. In that moment of personal grief, Dulumoni continued to make the 2500-strong audience laugh and cry with his vibrant expressions and mannerisms, and for a few moments their thunderous applause made him forget his sorrow. Yet his family waited for months for him to return home, even if only momentarily. But Dulumoni’s larger family, the 120-130 members of his theatre, provided him with all the solace he needed to endure those difficult times. That, perhaps, is the unique pleasure of being part of mobile theatre.

~ Merajur Rahman Baruah is an independent documentary filmmaker based in Delhi.

Letters to the Editor Himal Southasian

There are many ways to destroy a city

Parzania and the dictator of Gujarat