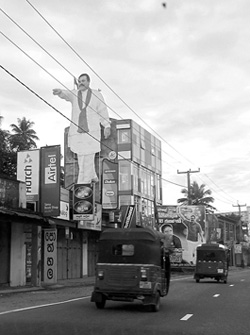 Less than a month after the end of the Fourth Eelam War, the state-owned weekly Silumina carried a full-page interview with a Sri Lankan astrologer. ‘President Mahinda Rajapakse and the Rajapakses will rule this country for a long time,’ he predicted. ‘The next chapter in Sri Lanka is reserved for the Rajapakses.’ In Sri Lanka astrology is serious business, with politicians avidly soliciting favourable predictions. The political importance accorded to astrology by the Rajapakses was also on display when the authorities arrested an astrologer in June 2009 for making an anti-government prediction.

On 8 September, the last remaining obstacle to the establishment of this Rajapakse future crumbled. The 18th Amendment to the Constitution is a sui generis piece of legislation, designed to suit the politico-dynastic requirements of the president and his family. It enhanced the powers of the president even while removing the term limits that would bind him. Otherwise, President Mahinda Rajapakse would have had to retire from politics in 2017, an utterly unpalatable prospect from a personal perspective, and disastrously premature from a dynastic perspective. Retirement would not only deprive the president and his family of the power that comes from confirmed expectations, but in turn would make them vulnerable to political, propaganda, and perhaps legal attacks by opponents and erstwhile supporters, given the polarisation they have created in Sri Lankan politics. President Rajapakse would also want to stay president until his eldest son, neophyte parliamentarian Namal, amasses enough years and experience to succeed him.

The term-limit removal is compounded by the decisive tilting of the electoral playing field in favour of the United People’s Freedom Alliance ruling coalition. The 18th Amendment empowers the president to appoint key public officials, including the election commissioner and the inspector-general of police, as well as members to independent commissions. This confluence of uncontrolled authority will render impossible even marginally free and fair elections, and the Rajapakses as a family should be able to retain power for more than a decade, via nominally democratic elections with predetermined outcomes.

In certain situations, optimism can be dangerously misleading. When the ruling coalition asked for a two-thirds mandate at the parliamentary elections in April, many believed that President Rajapakse would use this to strengthen the legislature, as promised in his election manifesto. Others believed that he would implement a reasonable political solution to the ethnic problem. Anyone who suggested that the president would use a two-thirds mandate to prolong Rajapakse rule was dismissed as suffering from Rajapakse-phobia or Rajapakse-animus. In a society where many professed to believe that a war could be conducted for four years without causing a single civilian casualty, credulity can be limitless; once you swallow the canard of ‘humanitarian offensives’ or that of ‘welfare villages’, any lie can supplant the truth, so long as it is camouflaged by beguiling words.

Map of de-democratisation
Hindsight is often illuminating, sometimes terrifically so. Ever since Mahinda Rajapakse won the January 2010 presidential election, his second, Sri Lanka has been experiencing events considered impossible until they happened – and promptly accepted as unexceptionable once they did indeed take place. On the night of the election, armed soldiers sealed off the Colombo hotel in which presidential candidate, and former head of the Sri Lanka Army, Sarath Fonseka and other opposition leaders were staying. Barely two weeks later, Fonseka was arrested under military law and three courts martial set up to try him. Defence Secretary Gotabhaya Rajapakse, the second most powerful man in the country after his brother, repeatedly and publicly expressed his conviction of Fonseka’s guilt, thereby creating serious doubts about the impartiality of the tribunals, manned by officers whose careers depended on the defence minister, Mahinda, and the defence secretary, Gotabhaya. Fonseka was found guilty by the first military tribunal, and deprived of his rank, honours and pension.

The Sinhalese south watched these momentous events with indifference. Perhaps if the south had objected strongly when Fonseka was arrested – or when the president brought under presidential control the departments of the attorney-general and the legal draughtsman, thus allowing him to interfere in the judicial process at will – the cloak of impunity would have been torn and the march of the Rajapakse juggernaut slowed. In the past, the Rajapakses did shelve controversial measures due to southern objections, the aborted attempt from June 2007 to expel Tamils living in Colombo lodges being a case in point. In the absence of a strong negative signal from the south this time around, however, the Rajapakses were emboldened.

For countries at crossroads, a wrong turn can be avoided only if the populace comprehends the singularity of the situation or the uniqueness of the actors. Had Tamil society understood the qualitative difference between other Tamil leaders and Velupillai Prabhakaran, the subsequent tragedies, including the total collapse of the Tamil cause, could have been avoided. But Tamil society was too dazzled by Prabhakaran’s achievements, and too blinded by the obsessive desire to defeat the Sinhalese state, to understand the nature of the monster it was nurturing.

A distressingly similar fate is now overtaking the Sinhalese (and therefore Sri Lanka). The Rajapakses are not just another bunch of corrupt and vainglorious politicians, but are qualitatively different from other would-be despots. The Rajapakses posses the determination, the drive, the ingenuity and the discipline needed to impose their dynastic project on Lankan society, made acquiescent by dreams of nationalist grandeur. And if there was any doubt, the passage of the game-changing 18th Amendment should now end it. Unless Sri Lankan society acknowledges this seminal difference, at least now, it will not be able to anticipate the distances to which the Rajapakses can take the people – until they are actually there.

According to the general-secretary of the ruling Sri Lanka Freedom Party, Maitripala Sirisena, the next constitutional amendment will reform the 13th Amendment (on devolution) to ‘give the Local Government Bodies more authority’. In the rhetoric of the Rajapakses, this probably denotes a plan to disempower Sri Lanka’s provincial councils by reallocating some of their functions to the central government and others to local authorities. Sirisena’s reference to ‘doing away with the existing weaknesses in the 13th Amendment’ probably indicates that this rearrangement will be achieved by abolishing the Concurrent List, with some powers being taken by the central government and others transferred to the local government bodies.

In his election manifesto, Rajapakse said he would turn local government bodies into the ‘fundamental and strongest unit of the national administration’. The end result might well be the effective replacement of provincial-level devolution of power with local-level administrative decentralisation, an arrangement more consonant with the declared Rajapakse belief in the non-existence of an ethnic problem and, thus, the superfluity of power-sharing.

The Sinhalese south will be indifferent to the mutilation of the 13th Amendment, while the Tamil parties are too debilitated to resist. In early September, the disastrous state of Tamil politics was demonstrated by the fact that the Tamil Political Parties Forum was compelled to ask the visiting Indian foreign secretary, Nirupama Rao, to ‘prevail upon the Sri Lankan government to engage the elected representatives of the Northern and Eastern provinces in the resettlement and rehabilitation work’. The fact that the elected representatives of the Tamil community, including a cabinet minister, felt forced to ask a visiting Indian official to request their own government to let them take part in the rehabilitation and resettlement of their own constituents is a telling indication of the pathetic state of Tamil politics.

The Rajapakses are transforming the Constitution – and with it the, Lankan political system – amendment by amendment, which obviates the need for a referendum, all in the name of national security. After all, according to the regime, the LTTE threat continues to loom, in its diasporic avatar. ‘They may not have artillery pieces in their arsenal and their strategy will be different, but let me tell you their goal will be the same,’ he warned recently. Thus, in defining Sri Lanka’s unity and territorial integrity from the LTTE as the main task of post-war Sri Lanka, the regime is able to use the national-security argument to subvert democratic right with the silent consent of the Sinhalese majority.

Securing the country
The Rajapakses favour an economic model that aims at achieving growth at whatever cost, camouflaging its anti-poor nature through the use of hyper-nationalist rhetoric. In reality, market fundamentalism is incompatible with labour and civil rights. The silent constitutional revolution the Rajapakses are implementing might seek to remove these ‘developmental impediments’; while the regime’s fiery nationalist-patriotic discourse, its resurrection of the Tamil Tigers bogey, and its occasional run-ins with the ‘vile West’ will serve to distract public attention from economic policies that compel the poor and lower middle class to bear almost all costs of this rabid pursuit of growth.

The Rajapakse plan for the city of Colombo symbolises this nexus between the current economic and political strategies. As a first step, the regime is planning to evict 60,000 poor residents and sell their commercially valuable land to developers. Many are occupants of several decades who are paying rates and bills to the municipality and the government. Though the government says only unauthorised occupants will be evicted, its past actions demonstrate that even authorised occupants will not be spared (see Himal July 2010, ‘Securing the city’). But this task of ‘class cleansing’ will be difficult so long as the Colombo Municipal Council (CMC) remains an elected body: in any election that is even a little free and fair, the opposition United National party (UNP) will win in Colombo, and a UNP-led CMC can create legal and political impediments to the Rajapakse plans to ‘cleanse’ the city by evicting its poor. Therefore, plans are afoot to replace the CMC with an unelected special authority, controlled by the Defence Ministry no less – ie, Mahinda and Gotabhaya Rajapakse.

Despite the end of the war, investment in Sri Lanka lags, defence expenditure is high and the debt burden is growing. This confluence could well plunge Sri Lanka into a Greece-type economic crisis. While such a situation could lead to cause political unrest, it almost certainly could result in regime change only in a true democracy, not in a nominal one such as contemporary Sri Lanka. Most likely, that is another reason that the regime is bent on accelerating the constitutional change process: so that the Rajapakses will be firmly in saddle when the economic crisis hits, and harsh structural adjustments become unavoidable.

~Tisaranee Gunasekara is a Sri Lankan commentator based in Colombo.

Tisaranee Gunasekara is a political commentator based in Colombo.