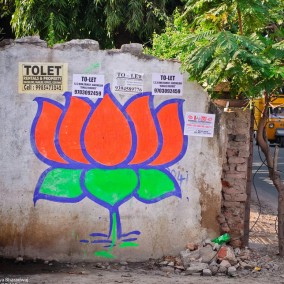 The president of the Bharatiya Janata Party (BJP), Amit Shah, released a booklet titled Know the Truth: Why the so-called intellectuals are silent then and violent now on 5 November 2015. It is a collection of columns published in various Indian dailies defending the BJP against accusation of rising intolerance under its watch. The document was presented as a response to the criticism it faced from various artists and writers, who returned awards given to them by the state. Accompanying these columns were statements made by senior BJP leader Arun Jaitley, and two write-ups by Venkaiah Naidu and Mukhtar Abbas Naqvi. The writings assert that the claim about India being more intolerant today than it was in the past are devoid of substance.

While the booklet itself received scant attention, and now that the dust has settled on the rage against intolerance, it is important to interrogate the arguments it presents.Is there any truth, for instance, in the defence that attacks against the BJP are‘manufactured’ and biased? Were these public intellectuals simplifying political complexities? And why does the rationale presented by the BJP-RSS apologists hold the propensity to become ‘common sense’ for the majority of Indians in times to come?

How fringe are these groups, when violent assaults against those questioning Hindutva politics are given tacit support by the ruling BJP.

Know the Truth presents a number of arguments to defend the BJP. First, those similar events have happened in the past under the aegis of the Congress regime. Some examples given are the anti-Sikh massacre of 1984, the imposition of the Emergency in 1975, and the expulsion of Kashmiri Hindu Pandits from their homes. Second, they represent what happened in Dadri – where, on 28 September, a mob killed a Muslim man for allegedly eating beef – as a ‘stray incident’.

How does one respond to these?

While there is no defence for either the Emergency or the riots against the Sikhs, both spearheaded by Congress leaders, there is a difference. The BJP, with its close organisational link with the RSS, has an organised vision of building a Hindu Rashtra in India, which besides censoring religious minorities and their cultural world also privileges a monolithic Hindu way of life over plural imaginations within Hinduism. Notwithstanding the riots that broke out in many of the states governed by the Congress in the past, and some intemperate statements by some of its leaders, the Congress does not share this narrow world view.

Are lynching and mob violence, such as those in Dadri stray incidents or part of an orchestrated strategy by the Sangh Parivar to keep alive and fuel communal distrust? In Dadri, six of those involved had links with the BJP. What connects the Dadri incident with the killing of rationalists like Malleshappa Madivalappa  Kalburgi, Narendra Dabholkar and Govind Pansare, is the persistent attempt to attack public reason and replace it with a Hindutva interpretation of history and culture in India. Dabholkar, though murdered in 2013, when BJP was not in power in New Delhi, was killed by those committed to silencing ‘threats’ to Hinduism.

It is always the variously named ‘Senas’, which have sprouted across Karnataka, Maharashtra and other states, that carry out these reprehensible acts, allowing BJP and its leadership to distance themselves from these incidents. This strategy permits the BJP the political space to rationalise such incidents as manifestations of the ‘hurt’ sentiments of the Hindu majority. How fringe are these groups, when violent assaults against those questioning Hindutva politics are given tacit support by the ruling BJP. Statements made by the likes of Yogi Adithyanath, who asks his Hindu supporters to kill ten Muslims, if they kill one Hindu, and BJP’s Giriraj Singh, who in the run-up to the 2015 Bihar polls, declared that those who do not support Prime Minister Modi should go and settle in Pakistan, have not been officially condemned.

Political scientist James Manor observes in his studies that unlike riots, usually race related, in the US and UK, mob violence and riots in India are not spontaneous. Given the persistent organisational support to fuel distrust among communities, one cannot brush aside these incidents, as Jaitley wishes to do, as ‘stray’ or blamed on fringe groups. This kind of argument resembles those made by security forces when unarmed civilians who die during security and combing operations are referred to as collateral damage.

Another major contention in the booklet is the supposed ‘intellectual opportunism’ among progressive public intellectuals. The document argues, they are selective in their condemnations, and are more interested in appeasing minorities. It accuses these intellectuals for not voicing their dissent when a fatwa is issued against AR Rahman, or when Taslima Nasreen and Salman Rushdie are threatened by Islamic groups. The booklet asks, aren’t these actions brushed aside because these threats are issued by Muslims and other religious groups, who are in a minority?

Nehruvian secularism indeed expected a certain ‘generosity’ by the majority community towards the minorities, owing to their vulnerability in the aftermath of Partition. But the demand today is for ‘equal respect’ for all religions, which includes equal accountability when it comes to excesses of all religious groups. However, secular intellectuals have been hesitant about protesting against the bigotry of minority communities in the belief that it cannot assume the proportions of majority intolerance, and is never backed by the state. This line of reasoning – where more leeway is given to the intolerance by Muslims, because of its minority status – has helped rightwing mobilisation in India and smacks of a politics that depends on majority patronage.

BJP’s document repeatedly mentions Kashmiri Pandits and asks why progressive intellectuals have remained silent about their displacement. Except for the BJP’s more sectarian understanding of the issue, which has culminated in the idea of resettling Hindu Pandits in separate settlements in Kashmir – there has been very little public deliberation on this subject. This has been further complicated by the fact that a majority of the Pandits are moving closer to the BJP, since they see it as the only political outfit articulating their concerns. While displacement of the Pandits is a tragedy, they are seen to represent Indian security forces and the Hindu-nation-state in the valley. In popular perception, progressive intelligentsia and their views come across as being sectarian, because of their support for the Muslims and their reluctance to articulate a clearer and fair position on the Pandits; a perception the BJP cites as a glaring example of ‘selective’ outrage.

Finally, the document addresses the question of whether the ‘saffronisation’ of institutions and the rewriting of history ought to be seen as a mark of growing intolerance. It emphasises a government’s legitimate right to make appointments of their choice. The BJP alleges that, up until now, only one point of view has found space in Indian academia; alternative (non-secular) viewpoints were suppressed and provided little opportunity.

Undoubtedly, India does need further public deliberation regarding appointments to public institutions. It is well within an elected government’s ambit to appoint academics of their choice. Previous non-BJP regimes, especially the Left in West Bengal, made appointments based on their proximity to the party. And even the accusation that many progressive public intellectuals did not make any noise about such appointments or complain about institution being ‘taken over’ is not without merit.

But the complaint against the BJP now is not on ideological grounds; it is on the issue of protocol and qualification. Curriculum and history is now being altered and rewritten without emphasis on evidence or research. For instance, the BJP appointed Chairman of the Indian Council of Historical Research Sudershan Rao (who resigned in November 2015) claimed that Ramayana and Mahabharat were historical events and not mythology. Also, do appointed individuals have the requisite qualifications or professional standing to lead a government institution? The appointment of Gajendra Chauhan as chairman of Film and Television Institute of India is a case in point.

Much of the BJP’s mobilisation on these issues touches upon what is perceived to be ‘popular’ opinion and ‘common sense’ beliefs. These should not be brushed aside as mere constructs by a rightwing party. It is important that secular-progressive politics take note of where and how these grievances are finding a groundswell of approval as common sense, and becoming a tool for political mobilisation. This, in turn, would also be a necessary approach to avoid ghettoisation of minority politics in a democracy. There is a need to foreground debates that demonstrate not merely tolerance but ‘mutual respect’ among communities. It is this lack of clarity and preparedness that offers the breeding ground for rightwing and ultra-nationalist politics. It is only through the further articulation of secular-progressive positions on contentious issues that the intolerance of the rightwing politics becomes more explicit and clear.

~ Ajay Gudavarthy is with the Centre for Political Studies, Jawaharlal Nehru University. He has recently published his book titled Cultural Politics of Modern India (Aakar, Delhi, 2015), where he has dealt with some the irreducible tensions in Indian politics that he has alluded to in this essay.

Is Kerala’s pokkali the rice of the future?

Pokkali is one of the oldest rice varieties in Kerala. It became prominent for its salt-tolerant and flood-resistant properties and is now being pitched as a climate-adaptive crop