Skip to content
Commentary > The return of the personality cult

The return of the personality cult

Will the resurgence of a personality-based politics undermine public institutions? 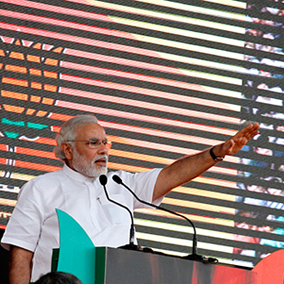 With crisis brewing in the Aam Aadmi Party and complaints of ‘dictatorial traits’ on the one hand, and the ascendance of the Modi-phenomenon on the other, one could ask if India has taken a turn towards a personality-centred politics? While we continue to take pride in democracy, we seem to be gradually slipping into a morass that collectively pushes us towards the myth that strong personalities can perform magic in overcoming the hurdles that we routinely face. There are various reasons that have led to this fructifying of our overt admiration and utter dependence on hero-worship as the last resort and last ray of hope.

India has always claimed strong leaders from Jawaharlal Nehru to Sardar Vallabahai Patel to Indira Gandhi. However, over a period of time strong personalities have emerged primarily by undermining institutions. They appear as an alternative to the despondency and desperation created by institutional decay. Individual leaders seem to express strong leadership qualities only when institutions and accompanying procedures are weakened. This was evident in the 1970s with Mrs Gandhi’s undermining of internal democracy within the Congress. Chief Ministers were handpicked by the ‘high command’ while she made an open proclamation for a more committed judiciary and bureaucracy as a manner of demonstrating her control over the ‘system’. She was lauded as ‘Durga’ for her role in liberating Bangladesh. Congress won elections based exclusively on her campaigns and she made it a point to demonstrate that she could win elections even from the South when she contested from Medak in Andhra Pradesh (although this was considered to be a ‘safe seat’). The parallel in the strategy with Modi contesting from Varanasi cannot be missed. The slogan then was ‘India is Indira, Indira is India’. Today, it has been scaled up, moving beyond the nation into a conflation with the ‘all mighty’ himself – ‘Har Har Modi, Ghar Ghar Modi’. The contest now is over the Central Bureau of Investigation – you either control it or claim to be a victim of its vindictive campaign. We refuse to believe that there can be anything like a transparent investigation, or a fair trial. In expanding the personality cult, more institutions will have to succumb to this phenomenon, including the Election Commission of India, the hints of which we already have seen in the recently concluded general elections.

Even those political practices that we can otherwise consider to be progressive and contributing towards the democratic well-being of our institutions can, willy-nilly, aid this process of undermining them altogether and leaving the space to be occupied by ‘strong’, ‘decisive’ and ‘incorruptible’ individuals. Consider the promulgation of the Right to Information Act (RTI): rather than empowering the vulnerable, it has instead contributed more robustly towards exposing public institutions and the decay within them, unsparing even of the legislature, executive and the judiciary. It has inadvertently contributed to the dominant mood of our times, which is that ‘everyone is corrupt’, except for the corporate world that does not come under the scrutiny of the RTI at all. The public role of the state inversely begins to look like a private institution, owned and ‘managed’ by few, while the private or corporate sector begins to assume the proportions of a public institution with their contribution to the nation’s growth, its apparently selfless philanthropic activities, its investment in education and health, and the discourse generated about employment ‘for all’. This, even as the deaths of RTI activists has now become a regular news feature.

In a similar vein, one the major protest movements in India in recent times, the one against corruption, has served to further increase popular disillusionment with political institutions. Anna Hazare’s soap opera combined a rich participatory ethos with a drive for centralisation of power in the single institution of the lokpal (citizen-ombudsman), managed by ‘five wise men’. The all-pervasive corruption in the system can apparently only be arrested by an all-powerful Lokpal. In this imagining, democracy and diversity are considered a hindrance to accountability and the efficient functioning of institutions. Representation is suspect, since it is bought with votes and liquor. Thus, politics and politicians can be considered dispensable (they can be ‘recalled’) as long as there is a strong centre of power, managed by those ‘above’ the corruptibility of the representative process, just as if in a Bollywood movie. Self-righteous claims provide the necessary justification for ‘righteous lawlessness’. How far in time can it be then that ‘five wise men’ are replaced with one wise, strong and decisive superhero?

Neoliberal reforms of the last two decades have also thickly contributed to the resurgence of personality-based politics in India. The facelessness of the model with transnational capital flows makes it difficult to find the source of political and economic processes. For those living in rural hinterlands, the agrarian crisis is evident but the reasons are not as clear. Even the upwardly mobile professional classes and middle classes are experiencing mobility with uncertainty. The emergent ‘risk society’ grows and spreads with the withdrawal of social security measures, ‘hire and fire’ policy frames, voluntary retirement schemes, and the retrenchment, contractualisation and informalisation of employment. This is markedly different from the European experience where middle classes had a stake in democratic processes, in stable and autonomous intermediary institutions as a sustainable basis for democracy, which in turn delivered assured social security. Earlier the UPA regime had two power centres: it was driven by a division of labour where the Gandhi family stood for welfare and a human face made of the social security net, while Manmohan Singh and the Planning Commission were considered the motors of growth. While the Gandhi’s won the elections for the Congress, the Manmohan-Montek team took care of the economy. The tussle between the two, however, created confusion and became susceptible to ‘policy paralysis’. Now, we have moved to a model where a single individual has struck it out to claim responsibility for bringing back a robust economy, employment and a fast paced urbanisation. He has promised stability which he earlier suggested could be achieved through calls for ‘compulsory voting’. More recently this was reinforced by the rather ‘nationalistic’ suggestion made by Sri Sri Ravishanker to prohibit regional parties from contesting for elections to the Lok Sabha, in order to avoid the ‘mess’ of coalitions. In times that are bleak and opaque, the brevity and finiteness of an individual figure holds clarity and has created enthusiasm in the public imagination. If in the process institutions are weakened, who should be worried?